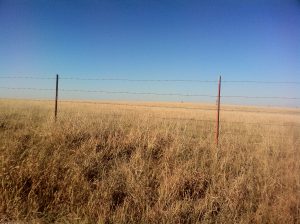 Before he served our country in Viet Nam my friend Jimmie Reed worked on his dad’s ranch in Foraker, Oklahoma. Jimmie and Bill Moon and I played football for the Pawhuska, Oklahoma Huskies and graduated together in 1961. The summer between our junior and senior years Jimmie’s father, Phil Reed, needed some fence built and Jimmie volunteered Bill and me to help. Mr. Reed paid us $7.00 per day plus a hamburger at lunch time at the old Foraker store.

One typical Osage County July day Mr. Reed and Jimmie came into Pawhuska at 6:00 a.m. and picked up Bill and me to work. If you have never had the experience of building barbed wire fence across a pasture of unyielding Osage County sandstone where shade is illegal, may I advise you to maintain your current status. We were equipped with bales of barbed wire, wire cutters, wire stretchers and, surprisingly to me as a town boy, sledgehammers and long iron pikes. Oh, we had manual post hole diggers but they shrank in fear when encountering two inches of top soil over two feet of rock.

About the only way to drive a metal fence post deep enough to hold stretched out wire was to first stand on the tailgate of a pickup and make a hole by driving down an iron pike with a sledgehammer. Then we had to drive a post into the hole.

That particular bucolic summer day on the prairie as I dodged the zooming grasshoppers and wondered how I was going to pay Jimmie back later by beating him at snooker at the local pool hall if we made it to dark, a cowboy from the nearby Boots Adams ranch drove up and spoke to Mr. Reed. Mr. Reed who was usually calm and laconic got agitated. I overheard him tell the cowboy something had to be done right away. Mr. Reed used a couple of emphatic words I had never heard him utter before.

Gentle Reader, you are probably wondering why Mr. Reed and Boots did not simply discuss the matter via their cell phones. Well, in 1960 a pickup was the cell phone. Anyway, the cowboy took Mr. Reed’s comments back to Boots. Here’s what it was all about.

Boots Adams, who was once the president of Phillips Petroleum Company headquartered in Bartlesville, Oklahoma, used to regale eastern dude money men with the great golden west by introducing them to cowboys, horses, cattle and the small herd of buffalo he kept at his ranch. We called them buffalo before the Nature Conservancy opened shop and made us say bison.

It turns out bison and cattle are kind of like Democrats and Republicans. They generally do not play well together. So, Mr. Reed told Boots’ cowhand something had to be done when the cowhand said seven of Boots’ buffalo had broken out and were causing havoc among Mr. Reed’s cattle.

Well, Boots’ cowboy hurried back to Boots with Mr. Reed’s concerns then returned. I heard the cowhand say, “Boots said to just shoot ‘em”. Actually, Boots used somewhat more colorful vernacular. As for the cowhand he produced several rifles and ammunition and told Mr. Reed that Boots was sending a flatbed truck with a wench to meet up with us where the buffalo were roaming.

Mr. Reed, Jimmie, Bill, the cowhand and I jumped into the two pickups and flew off to hunt buffalo! It was not long before we found the burly beasts ambling around Mr. Reed’s pasture as though they belonged there. And just as the politically incorrect buffalo hunters who used to kill herds of buffalo from a train’s flatcar, we removed the seven marauding behemoths.

Please do not castigate us, the last of the buffalo hunters, for protecting the cattle. It was a job that had to be done. And it sure beat building fence. I wish Jimmie and Bill, and Mr. Reed too, were still here to fill any gaps in my recollection. On the other hand, I know wherever they are they are cooler than in The Osage in July and are perhaps still chasing after some mystical buffalo instead of pounding down fence posts.