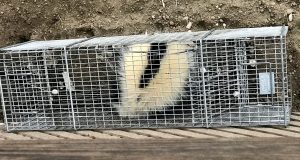 Aposematism. “Fair warning.” That is what that long Ancient Greek derived word means. “Stay away!” Or as it applies to skunks, “I stink; get back”. When one sees the white stripes among a skunk’s black fur Mother Nature apparently believes that is sufficient warning of skunks’ antisocial character. The Greeks used the term, aposematic, to identify any animal that had a way to warn off enemies.

My recent experience with skunks has led me to question whether skunks understand the “stay away” thing should go both ways. It also confirms my long held conclusion that the Ancient Greeks and Romans had already discovered over 2,000 years ago almost everything worth knowing.

The Ancient Romans provided the term for the scientific family we call skunks. It is Mephitidae which was based on the Roman god that referred to the malodorous gases emitting from swamps and volcanoes. It appears skunks had infiltrated the greatest cultures of Western Civilization. Of course, skunks and their relatives have not spared any other great cultures either.

But, Gentle Reader, we are not concerned with etymology, the origin of words, but with the origin of behavior, particularly skunk behavior as it relates to the family of skunks that has apparently decided Peg and I are their friends and that our home is, also, their home. What happened to that age-old skunk/human dynamic of don’t bother us and we won’t bother (or spray) you?

For three weeks now a family of skunks has been determined to live with us. This might not have been intolerable if the family of opossums and one squirrel that had already chosen our cabin as their home would have just moved on and given our crawl space to the invading skunks. However, reasonable retreat was not the opossums’ and squirrel’s decision. War was declared and you already know what the Dooms Day war weapon of skunks is. The skunks beneath our cabin deploy their spray frequently every night between about 10:00 p.m. and 6:00 a.m. depending upon the aggression of the opossums and the squirrel. Of course, Peg and I, whose only role has been to provide a warm dry area for all involved, get the collateral damage from this domestic terrorism. The stench wafts up through the floor and pervades every inch of our living space.

Peg used to tell me I needed to understand  the competing animals are simply some of our fellow mammals acting naturally. My attitude started out negative and has rapidly escalated to that of Bill Murray’s as the golf course groundskeeper in the movie Caddyshack and his battles with gophers. I just want them out from under our cabin and out of our lives. I realized I had slipped over the edge when I began to visibly rejoice each time I’d pass a dead skunk flattened on the highway. And Peg’s “tsk, tsk” admonition to me finally changed last night.

About 2:00 a.m. Peg heard a noise and got up to investigate. She opened the bedroom door that leads out to our porch. Fortunately she had switched on the outside light first. As she gingerly put a foot out the door a skunk came around the corner and headed into our home. Peg screamed, “Skunk!”. I grabbed my shot gun. The skunk kept coming. Peg slammed the door just as the skunk’s nose hit the glass. Peg and I are finally on the same page. Terminix, traps and anti-critter sprays and pellets are now our mantra. One positive thing is the opossums have decided they are through fighting and they and the squirrel have “moved on”. Now we just need to convince the skunks, starting with this “adorable” white with black stripe specimen that we caught last night. See the Euell Gibbons-like photograph Peg took.