Posey County Board of Commissioners

At their regular meeting held 03 April 2018 the Posey County Board of Commissioners listened attentively and courteously to my plans for an auxiliary courtroom. President Jim Alsop and Commissioners Jay Price and Carl Schmitz asked relevant questions and made helpful suggestions.

A small but highly useful courtroom can be in operation on the first floor of the courthouse within a short time and for relatively little expense, certainly less than $50,000 for the physical plant and about $40,000 per year salary for a full-time court reporter. The judicial officer could be a senior judge or magistrate who would serve as needed. Senior judges are paid by the State of Indiana so there would be no cost to Posey County for a per diem judge. A magistrate would probably have to be paid by the county.

The Posey Circuit Court has not been allowed a new court reporter position for twenty years although I have noted the real need in several budget requests and our caseload has grown dramatically since 1998. The new full-time court reporter could be dedicated to this new court but could help relieve the burden on the existing court reporters when not in session with the on-call judge(s). Mental health, juvenile delinquency, Children in Need of Services and other confidential or sensitive hearings that usually involve few people but can be emotionally draining or rambunctious as well as numerous logistical matters that strain the regular Judge’s docket could be conducted in this smaller courtroom.

The Commissioners sought to have a joint meeting about these issues with the Posey County Council on April 17, 2018 but schedules of all the necessary participants could not be accommodated for that date. The Commissioners wanted Chief Probation Officer Rodney Fetcher and me to set forth our plans then. As fortune would have it, I had planned to attend that April 17th meeting, but the Commissioners and Council had to reschedule it to May 01, 2018. Rodney will be there prepared to respond to any inquiries, but I will be helping teach other judges at the National Judicial College in Reno, Nevada on that day. Perhaps I can call in or attend electronically. I know we could work out such a video/audio conference if our new courtroom were already in operation.

Tuesday, April 03, 2018 Chief Probation Officer and court factotum Rodney Fetcher and I met with the Posey County Board of Commissioners to discuss the auxiliary courtroom on the first floor of the courthouse. You may recall we have been working toward creating a small but fully functioning courtroom that can greatly enhance public access to court services while aiding the Posey Superior and Circuit Courts to concentrate on other important matters of concern.

The elements of an American courtroom have changed little since the 1600’s: a judge’s bench and judge, places for the opposing parties (usually two), a court reporter with means to keep a record, a witness area and some public seating.

If citizens from Salem, Massachusetts were to hold a witch trial in a contemporary courtroom it would require only a few minutes for them to acclimate to the electricity and technology because these are simply ways we now enhance the attempted delivery of justice; the same justice sought for hundreds of years. Of course, justice is not always the result, but the physical plant is not to blame.

In Posey County, Indiana we have two fully functioning courts of general jurisdiction that often need to have people appear who are incarcerated or may be expert witnesses who have to travel great distances. Our goal of a newly refurbished courtroom would have video conferencing availability connected with our new jail and perhaps unlimited other locations. There would no longer be a need for several sheriff’s deputies to transport inmates to court for most preliminary matters. Trials would still be in person but most other hearings would not. Money and time would be saved while security would be enhanced and public humiliation lessened.

Indiana law allows for Senior Judges, Special Judges and Magistrates to hold hearings while the regular judges are conducting other proceedings. However, in Posey County we need another court facility for such use. Normally a new or renovated courthouse would be quite expensive. But we in Posey County have the opportunity to enhance justice, public service, security and fiscal responsibility by creating one new court reporter position and using some of our historical courthouse furnishings in an existing room in our historical courthouse. And we can have such a courtroom in operation quickly.

The immediate plan is to set up the courtroom for hearings and video conferencing. I estimate we can establish such a courtroom at a cost of less than $50,000 for the courtroom furnishings now plus the salary of one court reporter (approximately $40,000 per year plus regular county benefits to start January 1, 2019). Of course, such decisions are within the purview of the Commissioners and County Council with consultation with the judges.

An intermediate goal is to have Senior Judges, who are paid by the State, Posey County currently uses two on a case-by-case basis, or Special Judges selected for particular matters, conduct hearings in the small courtroom while both regular courtrooms are in session with the regular judges. Initial hearings in criminal matters and confidential family court cases normally do not involve many people. Such matters are well suited to our new small courtroom.

Long term goals might involve the creation of a full-time or part-time Magistrate to have a regular schedule in the new courtroom. On such issues I will defer to the sound judgment of future county officials unless I am requested to engage on this issue. For now, I respectfully suggest it is in Posey County’s best interest to implement the immediate and intermediate plans. 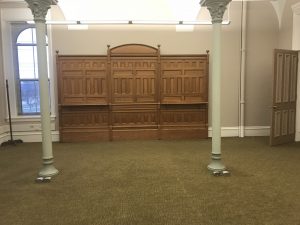 Posey County’s new jail and historic courthouse can now be connected to provide better and cheaper service to citizens. Sheriff Oeth may already have funds in the new jail budget to provide video conferencing between the jail and the courts. Sheriff Oeth and both Posey County judges have long been in favor of video conferencing. Perhaps this important public service can soon be in operation.

The benefits are many and the cost is low. Savings of transportation costs and deputy time along with greatly enhanced security for the public are within reach. And since most of the persons lodged in our jail are awaiting court disposition and, therefore, presumed by law to be innocent, public humiliation experienced from orange jump suits, handcuffs, leg shackles and armed guards can be reduced. And while most cases where video conferencing can enhance justice will be local jail to courthouse matters, we have numerous matters where inmates in state and federal prisons could appear electronically and we sometimes could save a great deal of expert witness expense in both criminal and civil cases.

For the Sheriff’s Department to institute video conferencing another major need is a location at the courthouse. We now, with the requested assistance of the Posey County Board of Commissioners and County Council, are in the process of refurbishing a small courtroom in our 142-year-old courthouse for just such a purpose. The photographs included with this article show the courtroom backdrop which was first used in 1893 and furniture from the 1825 courthouse that has been in the possession of the City of Mt. Vernon since 1893. Mayor Bill Curtis and the Mt. Vernon City Council have graciously returned these historic items for county use.

A small courtroom on the first floor of our courthouse will open up numerous important possibilities for both public service and saving taxpayer funds. While I plan to concentrate on this newly modified space as a Magistrate’s Courtroom to ease the burdens and costs of family type cases, this revamped space can be used for conferences by attorneys, mediation, pre-trial conferences, weddings and extra seating when there is overflow in the courtroom on the second floor.

Okay, we are ready for next week and the devil in the details of a Magistrate’s Court. Hang in there with me and maybe we can all do some good.