Modern schools of journalism, such as Indiana University’s Ernie Pyle School, would blanch at many of the Nineteenth Century newspapers. When one reads “news” accounts from the 1870’s and 80’s, there is often no difficulty discerning the politics and philosophies of the “reporters” and editors.

And while it might cause pause in a contemporary debate of journalistic ethics, I find comfort in knowing the true agenda of the person behind a news account, or even a newspaper column. I submit the only real difference between what we decry as yellow journalism and “fair and balanced” national media outlets is one is honestly biased and the other is disingenuous.

Now, whether I am correct or just skeptical and misinformed, is irrelevant to our discussion of the news accounts of the unfortunate circumstances surrounding the murder of Eva Redman and the lynching of her husband and murderer, Hume Redman, in October 1882.

Perhaps I should just quote from the Mt. Vernon Democrat of that day and let the conclusions fall as they may. Let’s start with the political views of the editor, Albert A. Sparks, who took great umbrage at those persons who faulted the actions of the Democratic candidate for sheriff.

First, Editor Sparks left no doubt as to his political affiliation

“Every Democrat to his post. Advocate the true principles of Democracy, that you have always held sacred. Keep your eye upon the enemy, and with a strict organization in every township in the county, old Posey will roll up an immense Democratic majority in November.”

As for the deputy sheriff, later sheriff, Edward Hayes, Editor Sparks let the naysayers have it:

In his book, The Ox-Bow Incident, Walter Clark wrote about lynch mob motivation:

Why are we riding up here, twenty-eight of us, when every one of us would rather be doing something else?

Clark was explaining why people who did not want to lynch someone often ended up being part of a lynch mob. Persons who would never resort to murder on their own may be unable to resist group murder.

In his work, The Jungle, Rudyard Kipling captures the essence of this dilemma:

People who believe in justice and are ashamed of group violence are often powerless to resist the force of a lynch mob. The irony is that often every member of such vigilante groups would rather let the law handle the situation. This is so even though we frequently disagree with or are dissatisfied with the legal system.

Of course, the most interesting question for each of us is: How would we act in a similar situation? What if we were in Nazi Germany in the 1940’s or in Zionist Israel today? Would we resist wrongs or accede to them?

It is not difficult to condemn the actions of others from a safe distance. But would we have the strength of character to oppose our friends and neighbors who may be caught up in the frenzy of prejudice, ignorance and hatred? I know of at least one local person who has done so.

When I read Mt. Vernon resident Sam Blankenship’s thoughtful and courageous letter to the editor about the “Ground-Zero Mosque”, I thought of the mob mentality from 1878 and 1882.

As October 2010 nears, the events of October 1878 and October 1882 seem almost as fresh as those of today. We may wish to look more closely at the actions of our ancestors and ourselves in the light of the hysteria of both times.

The story that a young Negro man was thrown alive into the fire box of a steam engine in October 1878 has been generally accepted as true but hard to confirm, until now.

During one week of that October one hundred and thirty-two years ago, seven Posey County African-American men were murdered by several groups of white men in our county. One man was shot and then stuffed into the hollow trunk of a tree. One was cut into pieces and thrown into an outhouse. Four were lynched on the campus of the courthouse. And one was, according to one eyewitness, burned to death in a steam engine.

On August 15, 2010 at about 6:15 p.m. Peg and I were at the post office in New Harmony when Basil Stratton approached our vehicle and introduced himself. Basil had read my accounts of the events of 1878 and wanted to tell me what his grandfather had told him on two separate occasions.

Basil now lives on the old Griffin Road and is a member of the New Harmony American Legion Post which is next to the post office. He was on his way to the Legion when he saw me waiting in the car while Peg mailed some letters.

After introducing himself, Mr. Stratton told me he was born in Posey County in 1937 and had graduated from high school here then immediately joined the Marines. Basil’s maternal grandfather, Walker M. Bennett, was born in 1868 and was ten years old when he was with four white men at the railroad depot in October 1878. Basil either was not told or does not remember the names of the white men.

His grandfather told him the white men were angry because they believed the black man had murdered his pregnant, white girlfriend. According to the news accounts of that time, the white prostitute, Annie Mc Cool, had been murdered in September 1878, allegedly by her “Negro paramour” because she was pregnant.

Walker Bennett told Basil that the men captured the black man near the train depot that was located where the Mt. Vernon Thrift Shop is now. They threw him into the fire box, but because his body did not conduct sufficient heat, the train engine would not run. What was left of the body had to be removed and replaced with coal.

I asked Basil if he minded if I wrote about his grandfather’s account and he told me, “No”. He said his grandfather thought what the men did was justified by what they believed the black man had done. Of course, Basil did not agree but, as he told me, things were different then. But Basil thought it was important for the truth to come out.

An irony pointed out to me by Basil was the coincidence of where the young Black man was killed and where President Harry S. Truman’s Whistle Stop Campaign stopped in 1948. President Truman spoke from his train car at the Mt. Vernon depot. Of course, it was President Truman who, by his Presidential Executive Order, integrated the United States armed forces on July 26, 1948.

Next week another eyewitness account of the events of October 1878 will be discussed. If you have the time and inclination to follow along, we will meet again. And should anyone else have information about these events, please let me know. It is a small county and I am pretty easy to find. 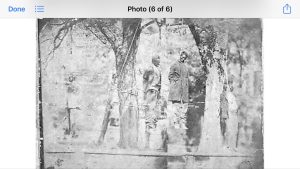 The McFadden/McFadin/McFaddin, etc., families have lived and served in Posey County since before there was a Posey County. Douglas Bruce McFadden who was born in 1940, reared in the community of Savah and now practices law in Washington, D.C., sets out the various permutations in his book, The McFaddens: A Family of Frontiersmen 1250 to 1950. Doug says the original Scottish spelling was MacFadyen, but with the clan migrating to Ireland then America several variations resulted. As Doug says, “The McFadden name has different spellings depending on the mood of the individual member of the family.” The McFaddens, p.3.

Doug’s older brother, Don McFadden, and I have been friends for over thirty years, but had never discussed the lynchings of 1878 until last week. Doug called me to talk about those events during the Christmas season of 2008. Both brothers related the same story told to them on several occasions by their grandfather, Benoia (Ben) McFadden (October 9, 1869 – June 19, 1949).

Ben McFadden’s father was Philocles Polk McFadden who was born November 4, 1844. Doug sets forth in his book the strong southern sentiment in Posey County:

“Their roots were in the southern states. This was true of many southern Indiana families and gave rise to the strong movement of the Copperheads in Indiana. It was, also, the strong belief of many that it was a political war instigated by the new Republican Party and the abolitionists.”

And citing to Smith’s History of Indiana Doug states:

“The organization and work of the Knights of the Golden Circle, or Sons of Liberty, as they were called at different times cannot be passed over …. Perhaps there was not a northern state which held so many persons who sympathized with the South, as did Indiana.”

Ben McFadden told Doug and Don that when Ben was nine years old his father, Polk McFadden, took him to the courthouse square in Mt. Vernon on October 13, 1878 to view the bodies of the four young African American men still hanging from locust trees.

Ben vividly recalled seeing the lynching victims and watching as several white men used the hanging bodies for target practice with shotguns. Ben, also, recalled a man’s eye being shot out with one of the errant pellets.

This account is corroborated by newspaper editor, John Leffel who was an eyewitness to the lynchings. On the front page of the October 17, 1878 Western Star he reported:

“The only accidents that occurred was the shooting of Alex Crunk, Sheriff elect, who was shot in the eye, and from the effects of which will lose that member. John Crunk was shot in the head and neck, the wounds, although painful, are not considered dangerous. Ab. Crunk and John Patterson also received slight scalp wounds. These gentlemen were all standing together on the south side of the square, and the supposition is that one shot wounded all.”

I thank Doug and Don for sharing their family history with me. That such significant events in our county’s history should be preserved, especially when there is much to learn from the events, appears clear to me. Therefore, should you have any information on the events of October 1878, please let me know. The facts, as facts, should be aired.

We understand that there are numerous rumors afloat as to the conduct of the Democratic candidate for Sheriff, Mr. Ed. S. Hayes, on last Saturday night. The silly story that he gave or offered to give Hume Redman a pistol with which to defend himself, upon the authority both of Mr. Hayes and Mr. James L. Caborn, we brand as a MALICIOUS LIE.

As for the DEMOCRAT, it only sees in the occurrences of last Saturday night an additional reason why Mr. Hayes should be elected Sheriff, being more than ever satisfied that he will make a fair, impartial and trustworthy officer.”

In his book, The Ox-Bow Incident, Walter Clark wrote about lynch mob motivation: