Funerals are a good thing. Weddings are a good thing. Naming ceremonies, graduation exercises, retirement parties and many other commemorations and celebrations distinguish us from everything else. There are sound reasons why for thousands of years humans have celebrated life and honored death.

It may be only a coincidence that Peg’s and my dear friend Ida June “Judy” Taylor and James V. Taylor share a common name. But when we attended the celebration of Judy’s life and accomplishments the lyrics of James Taylor’s song, “Rockabye Sweet Baby James” reminded me of why we take note of such things as the end of life as well as all the significance of what that life means to others who remain:

“There’s a song that they sing

When they take to the highway,

A song that they sing when they

Take to the sea,

A song that they sing of

Their home in the sky….”

Judy and her husband, James E. Taylor, made important contributions in many areas but, as most of us, they would likely point to their five children, ten grandchildren and twenty-eight great-grandchildren as their proudest legacy.

At Judy’s funeral her family and friends had the opportunity to point to her with the same love and pride. She accomplished much and re-entered the soil after a full and happy life.

The funeral rites for this proud member of the Osage tribe were a combination of Native American and White culture. Judy lived fully in both worlds. Having been born in 1928 she witnessed much of what was good and bad in the changing relationship of Native Americans and those who forced the changes. She remained true to her roots while not allowing bitterness to interfere. Her many years of service in the preservation of the history of Osage County’s multiethnic culture attests to her positive view of life.

Ceremonies are a major way we maintain our cultural heritage. Judy’s funeral rites included homage to her tribal connections and her full participation in the contemporary society encompassing it. Her Catholic faith seamlessly intertwined with Osage rituals such as the presence of eagle feathers and family members individually acknowledging Judy’s oneness with nature by reverently dropping clods of dirt into her final resting place.

When we take the time and make the effort to celebrate someone’s life and contributions we truly differentiate ourselves from all other species. We know we cannot change the ultimate outcome. That is not what we are attempting to do. However, we can honor our friends and family and when we do we also raise ourselves. For when we sing a paean to honor others, as the motto of Haskell Indian Nations University proclaims, “We Make Our Ancestors Proud Today!”, and we reaffirm that our own lives have meaning. 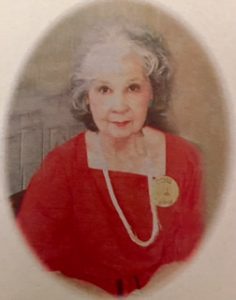