Joseph Campbell (1904-1987) was a professor of literature at Sarah Lawrence College in Yonkers, New York. Campbell was America’s recognized guru in the area of myth and religion. He postulated that the ultimate/unpardonable sin was to be unaware.

When Peg and I visited the just opened Equal Justice Initiative’s Legacy Museum and Memorial in Montgomery, Alabama earlier this month then participated in the Dred Scott convocation in St. Louis, Missouri last week, I was constantly made aware of Campbell’s admonition. I thought back to when I lived in an apartheid society of which I was barely conscious. When I saw the representations of lynchings and Jim Crow laws in Montgomery the stark reality of a separate and unequal daily life assaulted me. But when in St. Louis I listened to personal accounts of Black people who were on the unequal side of the equation, my own lack of alertness came into focus. 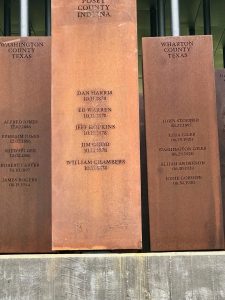 While you can anticipate the content of the displays at the EJI, when you walk through the hundreds of metal coffins inscribed with thousands of names of murdered Black people including several from Posey County, Indiana, you will naturally contemplate the evil we are capable of doing to one another just because someone may be an “other”. But when you hear directly from living persons who are still experiencing a denial of equal justice you are forced to confront your own previous lack of awareness.

The Dred Scott case was decided by the United States Supreme Court in 1857 and led directly to the Civil War four years later. It is only one of many wrong decisions of the Supreme Court but is probably the worst. Chief Justice Roger Taney (1777-1864) who sat on the Supreme Court for almost thirty years authored the 7 to 2 opinion. It held that Negroes could not be citizens of the United States and had no rights that white men were legally bound to recognize, and that Dred Scott must remain a slave.

On Monday, July 16, 2018 at Logan University in St. Louis descendants of Dred Scott (c.1799-1858), Confederate President Jefferson Davis (1808-1889) and Roger Taney along with one hundred and fifty judges, attorneys and academic scholars were brought together by Judge Judith Draper and her husband Justice George Draper in conjunction with the National Judicial College to engage in “reconciliation”.

NJC President Benes Aldana, NJC technology specialist Joseph Sawyer, Michael Roosevelt education specialist for the State of California Courts and I as an NJC faculty member presented the afternoon sessions after the descendants and audience members held an interesting and extremely positive discussion during three hours in the morning.

The relatives of Taney and Davis did not attempt to excuse slavery. They did, however, clearly and poignantly point out their ancestors had done many good things along with their egregious errors in moral and legal judgments. As Peg and I listened to them I was reminded of Mark Antony’s funeral oration for Julius Caesar:

“The evil that men do lives after them,

The good is oft’ interred with their bones.”

What the EJI and Dred Scott experiences did for me was force me to remember and dissect my experiences under the system of legal apartheid in my hometown of Pawhuska, Oklahoma. I had never given more than a passing thought as to why “Colored” boys could not enter the front door of the pool hall or come to the front part of the building. And now my home town is New Harmony, Indiana where, according to the book by William E. Wilson On the Sunny Side of a One Way Street at page 91 he wrote that when he was a boy in New Harmony:

“By the twentieth century New Harmony had lost the egalitarian faith on which it was founded a hundred years before, and Aunt Minnie’s Lizzie (Wilson’s Aunt’s Black servant) was the only Negro permitted to live in the town. She had a room in the hotel (owned by Wilson’s Aunt and Uncle) and never went out on the street, day or night. Uncle Harry and Aunt Minnie did everything possible to make Lizzie feel like one of the family, not only because she was an excellent cook but also because they loved her. Even so, I have often wondered since how Lizzie endured her ostracism in the town.”

And Wilson also writes of his father’s loss of his Congressional seat in 1925 because he refused to join the Ku Klux Klan.

Well, I am more “aware” now than I was before the visit to the EJI Museum and Memorial, the Dred Scott convocation and Mr. Wilson’s book, but realize there’s more I need to do while, I hope, there’s still time to do it.

I wish to sincerely thank the friendly and expert staff of our fine Alexandrian Public Library in Mt. Vernon, Indiana for providing me with several excellent reference works on Dred Scott and William E. Wilson’s interesting book on New Harmony.

For video of Peg’s pictures of the Convocation please go to: https://www.youtube.com/edit?video_id=qqOf6KZ7ZBw&video_referrer=watch