Charles Dickens wrote his novel, A Tale of Two Cities, about the French Revolution (1789-1799). Madame Defarge is a prime mover of the revolution who seeks revenge on the aristocrats for evil done to the poor. She maintains a record of who should be brought down by knitting their names into her needlework. She forgets nothing and patiently bides her time. Then she produces the list for the guillotine. Peg is a prolific and creative knitter.

During our COVID-enforced cabin fever I have often wondered how Peg can be so confident her memory of our past conversations is correct. Then yesterday as the thermometer hovered near single digits and we huddled in front of the fireplace while we talked and Peg knitted, it hit me. As Peg creates her marvelous hats, mittens and scarves she weaves in snippets of my naïve responses to her carefully crafted verbal mine fields.

Such innocent seeming statements from last autumn as, “Jim don’t you think someone should get some firewood ready for this winter?” and my careless response of “Uh huh” get woven into a woolen contract. My protests that I have no recollection of what promises Peg claims I made stand weak and alone when confronted with Peg’s forceful confidence.

It does me no good to complain that if we would just wait until spring such tasks as covering her countless plants or fixing run-on toilets or cleaning closets or doing practically anything but watching a ballgame on TV would not be so urgent. Peg just checks her knitting and says, “On such and such a date, you promised me ….” I am hoisted on her needlework petard with no way to contest her version of some long-ago casual conversation. 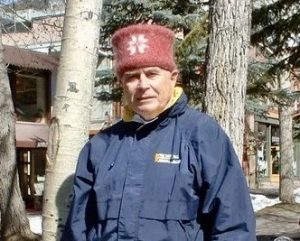 On the other hand, I really like the warm hats and mittens Peg knits for me, such as the hat I wore skiing that looks like Osage Chief Bacon Rind’s. Perhaps I should just accept that wives never forget and husbands never win in the battle over what was said by whom when. However, it seems unfair of Peg to wage this age-old war with knitted weapons of documentation. After all, she has studied yarns from Iceland, Scotland, Ireland and Vermont while I occasionally simply write them.