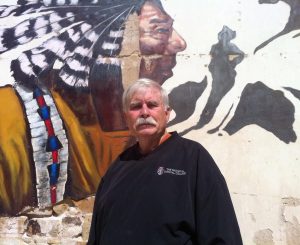 Hitler’s troops easily conquered that part of Stalin’s USSR known as Ukraine in 1942. Total world victory was almost in Germany’s grasp. Then Hitler decided to bring Russia to its knees at the Battle of Stalingrad. Six hundred thousand dead German soldiers and six months later Germany was on its way to total defeat. The Russians sacrificed one and one-half million of its soldiers to confront Hitler’s arrogance. Neither Russia nor Germany has forgotten this carnage.

When one visits the site of the battle in Volgograd, Russia today there is a 172-foot-tall statue of a Russian woman thrusting a sword into the sky. She stands erect on Mamayev Hill and guards the hallowed ground where so many died. There is a memorial close to her feet where the names of countless dead soldiers are carved into marble walls that line a descending walk to an eternal flame. No one makes a sound as they honor the fallen heroes.

When the United States government complains that Germany is not rushing to confront Russia’s belligerence on the border of Ukraine, a visit to Volgograd might explain Germany’s caution. As for us, we need only to recall our ignominious exits from our incursions into Afghanistan (2001-2021) or Viet Nam (1955-1975) to give us pause.

Most of us learn the hard way that angry and arrogant challenges often lead to dire repercussions. America may wish to tread cautiously in our efforts to dictate how other countries should handle their border crises. We did not brook Great Britain’s claims to territory below the 49th parallel (Fifty-Four Forty or Fight) in 1846.

And the same President, James Polk, who demanded the Oregon country from Great Britain annexed the Republic of Texas that Mexico believed should be a part of Mexico. Texas and Mexico share a border that is over 1,250 miles long. The border between Ukraine and Russia is over 1,400 miles long. About 40% of the residents of Texas are of Hispanic/Latino descent and for about 30% of Texans Spanish is their native language. Of the 41 million Ukrainians about 17% are of Russian descent and for about 30% of Ukrainians Russian is their native language.

As Ukraine was a part of Russia for hundreds of years, until 1991, and there are deep geographical, cultural and historical ties between Russia and Ukraine, Russia may consider Ukraine much as we considered “Oregon” and Texas. That does not mean the world should ignore Russian aggression or Ukrainian independence. It should, however, advise government leaders and those who would bang the war tocsins to remember that briar patches might be easily entered but may result in much lost skin to exit.