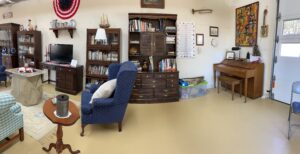 Joel Chandler Harris, AKA Joe Harris (1848-1908), was born in the state of Georgia before the Civil War and worked on a slave-holding plantation as a teenager. After the war he became an associate editor at The Atlanta Constitution newspaper. Harris had lived and worked around the evils of slavery and he had absorbed the folk wisdom of slaves who were prohibited by law from formal education. Harris created his fictional writings using Uncle Remus as a wise and shrewd observer of human nature hidden within animal behavior.

Harris intended his writings as compliments to the ability of Uncle Remus to explain human foibles by giving animals human failings such as arrogance. In the story of Br’er Rabbit and Br’er Fox contained in Harris’ Uncle Remus: His Songs and His Sayings, the meanness of the Fox is used by the Rabbit to escape by getting the Fox to “punish” the Rabbit by throwing him into a briar patch. Of course, that is exactly what the Rabbit really wanted.

Unfortunately, due to our current misguided wokeness in many areas, the slave dialect used by Harris now interferes with the appreciation of the literature of The Song of the South and a great number of those pro-African American folk tales are no longer read. However, for those of us whose time of birth helped us escape the ravages of the current misguided ignorance in the area of children’s literature, Uncle Remus is still imparting wisdom, such as enjoying a proverbial briar patch. Or in my case, Peg’s banishment of me to the solitude of our bunkhouse when I got COVID and Peg did not.

At first, I was offended when Peg handed me my toothbrush and a set of clean underwear and locked our cabin door behind me after she forcefully shut it. It was not that I wanted Peg to share in my experience of a sore throat, lethargy and endless amounts of crud being expelled from my body. It was more the feeling that a one-person leper colony was a rather lonely possibility, plus I really missed my favorite recliner and ready access to the refrigerator. Oh, and Peg too, of course.

Be that as it may, Peg sentenced me to two weeks of quarantine with the same lack of ceremony she would have exhibited if a door-to-door encyclopedia salesman had appeared with a sample case. You remember encyclopedias don’t you, Gentle Reader? You know, those things with pages, tables of contents and indexes that went the way of the dodo bird after Google came along. Well, that may call for a different column.

Anyway, here I am alone with the piles of books I never read, the piano I used to play and old photographs of friends and relatives I barely recognize. I have been rummaging through boxes and drawers filled with the most interesting stuff not seen by me since high school. What a strange looking dude I was with dark colored hair and a discernible jaw line. Who was that and who are those undecipherable young people around him wearing weird clothes?

Say, Peg, what is this thing that says Maytag on it? Is this where my clean clothes came from? It must be a miracle machine. How does it operate? By the way, there is no stove out here and after several days of eating the leftovers you sent with me, I am ready for some real food.

By the way, I have done my Paxlovid and am pretty sure I am not Typhoid Mary anymore. On the other hand, the bunkhouse refrigerator is stocked with leftover beer from our Fourth of July Family Reunion and the TV is constantly tuned to Gunsmoke reruns. The bunkhouse is the answer to every boy’s escape from his mother and every husband’s escape from constant inspection by his wife.

Clothes are in a pile where I take them off. The bed never has to be made to drill sergeant standards and every door knob and chair back is a hanger. But the most serendipitous of all? Peg is afraid to step foot in my little slice of heaven. I may claim to be eternally toxic. Bring on that Briar Patch!