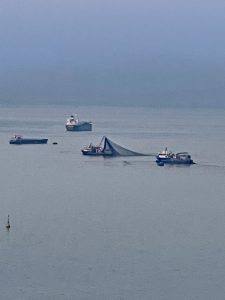 Each morning I look off my apartment balcony at the ships floating on the Black Sea that lies between the countries of Georgia on the southeast and Ukraine to Georgia’s northwest. So far the ships have remained of the merchant variety, but I always look first to make sure. Georgia is a country of four million people with virtually no way to defend itself. The Georgian government that fears Russia on Georgia’s northern border and the citizens of Georgia who fly Ukrainian blue and yellow flags are in constant yang and yin over the war being waged just across the Black Sea. The government worries about poking the Russian bear and the citizens publicly rally and demonstrate in support of the Ukraine population.

Recently Russia has been stirring up its long held relationship with the country of Belarus that lies between Russia’s western border and Ukraine’s northern border. Belarus is in the same military condition as Georgia. Belarus, as led by the politically embattled president Alexander Lukashenko, with its nine million citizens, is even more supine to Russia’s might than Georgia. Therefore, Belarus does not pretend to resist Russian moves to use Belarus as a staging ground for Russia’s military and probable invasion of Ukraine. At the very least, Belarus provides Russia with a vital logistical path for re-supply of its military.

This morning, December 15, 2022, I am gazing at the tankers and grain ships right outside my window and, as we humans often experience, a totally unrelated memory of a simpler time comes to mind. In 1954 my family had a new Ford automobile, the kind with front fenders. Some of you will remember fenders and maybe will have even ridden on them to deliver newspapers as my brother Philip and I used to when we could wheedle Mom into driving us along our paper route. In 1954 the Korea War was over and our generation’s war in Viet Nam had not yet begun. The hero of the Normandy Landing of WWII, Dwight Eisenhower, was president of the United States and America was keeping the Soviet Union on its heels, not with bombs but with the humanitarian Marshall Plan.

In those halcyon days in Pawhuska, Oklahoma the Pawhuska Journal Capital newspaper was owned and operated by Glen Van Dyke and Phil and I had one of the delivery routes. We would go to the Journal Capital office on Kihekah Avenue and get bundles of papers. Phil and I would fold them into five-point throwing projectiles and fill two canvas bags that we hung over the Ford’s hood ornament. We each sat on a fender and competed for distance and accuracy as we banged the papers off the porches of our neighbors who sometimes complained to our parents.

I did not read the Journal Capital then and never had any inclination at age 11 to write a column in it. However, I do remember my mother and father sitting at the kitchen table and laughing at Glen’s witty sayings in his regular column. I still remember Mom and Dad laughing out loud when Glen complained that modern science seemed to be able to create hand warmers and foot warmers but for some reason could not come up with a toilet seat warmer. Gentle Readers, that was almost 70 years ago and, while we are now on our way to Mars, we still have not cracked the code on toilet seats. However, we seem to still be sending vast amounts of aid to keep the Russians on their heels.