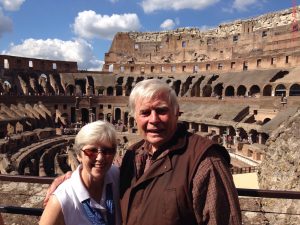 Donald Trump has declared he will make a third run for the presidency in 2024. Joe Biden claims he will seek re-election. Several Republicans, Ron DeSantis, Mike Pence, Mike Pompeo, and others are not so secretly hoping lightning strikes them, or maybe strikes Trump. Democrats Gretchen Whitmer, Kamala Harris, Cory Booker, and others are feigning fealty to Biden but may be looking wistfully at the effects of Father Time.

In other words, American politics remains unchanged from the days of Jefferson and Adams. It also has regenerated its tiresome media circus of peeking under tent flaps and salivating at the probability of political gaffs. So, buckle up or just tune out for the next two years. As for me and Peg we have been looking at the past, as the present is just too fractious. So, as the pundits and politicians squabble like infants with dirty diapers, Peg and I have been interested in viewing the ancient ruins that became ruins when the cultures of the past let their tantrums get the better of them.

A couple of years ago we visited Rome and walked around the Coliseum. One gets images of gladiators and emperors who had no thought their pretentious edifice would be a mere pile of rubble one day. Then just last week we visited another ancient fort less than ten miles from our home in the country of Georgia. Georgia claims, according to the book Georgian Folk Traditions and Legends, to be situated at the juncture of Europe and Asia and to “[b]eing the most invaded country on earth.” For example, Russia that is Georgia’s neighbor to the north has most recently invaded Georgia in 2008 and 2014.

However, the fort we visited was built by several conquerors over thousands of years but was constructed in its present form on the orders of Roman Emperors Nero, Pompey, Julius Caesar Tiberius and Hadrian during the era 65 BC to the reign of Constantine, 306-337 AD. The name of the fort is Gonio-Apsaros Fortress and it is an impressive structure with ancient stone guard towers, sewage and water systems and Roman hot baths. Of course, today it is all just remnants of past glory. It is on the outskirts of the resort city of Batumi, Georgia near the shore of the Black Sea and about 3 miles from the Turkish border.

Gonio reminded us of the hauntingly impressive Native American pueblo village at Mesa Verde National Park in Colorado. This extensive cliff city was home to many Native Americans for over 700 years from 600-1300 AD. Was it simply abandoned, and if so, why? But once again we observed an impressive series of homes and a mountain stronghold that now is interesting and beautiful, but not lived in by its creators.

I suppose there are many reasons we enjoy visiting these sites of once vibrant communities gone dormant. The inventive genius of our human ancestors gives one a sense of awe and appreciation for the hard work and perseverance of people who were probably quite similar to us. If we could transport them to modern times or transport us back to their times, everybody would most likely fit right in with just a little movie make-up and a change of clothes.

The conclusion or question that keeps us awake, for example I am writing this at 3:50 a.m., is that just as the country of Georgia has been conquered numerous times (as has Jerusalem by Jews, Muslims and Christians on a revolving basis, and Rome and Greece by Vandals and Visigoths and North and South America by Spanish, English, French and Portuguese invaders) are our ruins going to provide interest to tourists of the future?

Investigative journalism that uncovers and publicizes official corruption has an American tradition going back to John Peter Zenger who was born in Germany in 1697 and died in New York in 1746. Zenger was a printer who wrote exposé articles about our English cousins’ ham-fisted governance of New York, especially by the Royal Governor William Cosby. Cosby took umbrage at these early efforts to inform Americans about government malfeasance. Cosby had Zenger charged with libel but in 1735 a jury refused to convict Zenger because the jury determined that what Zenger wrote about Cosby was the truth. What Zenger printed about Cosby related directly and only to Cosby’s actions as governor. Cosby’s personal life was not in issue. Such subjects as the state of his laundry or personal habits were not material to Cosby’s official actions. There was no “need to know” any salacious scatology.

The First Amendment is our best protection from bad government but it should not be cited in support of mere muckraking. Gossip is fun, if it is about others, but it is not germane to curing our body politic of corruption or bad decisions. And a bipartisan cooperation on matters of national importance would be most welcome. We have certainly been blessed many times before with such attitudes. For example, Republican President William Howard Taft appointed Republican Henry L. Stimson (1867-1950) as Secretary of war (now Secretary of Defense) in 1911-1913. Then later two Democratic presidents, Franklin D. Roosevelt and Harry Truman, appointed Stimson for the same position (1940-1945). Stimson had the experience and knowledge America needed. His political party affiliation was irrelevant to understanding and meeting the threats to our country from Japan and Germany.

But even though Stimson was not naïve about foreign designs on American assets he famously eschewed delving into personal matters. Stimson’s most famous quote relates to secret Japanese dispatches. Stimson explained trust cannot be established by distrust. He succinctly posited: “Gentlemen do not read one another’s mail.”

As story after story and book after book come out about Joe Biden and Kamala Harris and Donald Trump and Mike Pence the muckraking inundates the investigative journalism. We do need to know our politicians’ philosophies, positions and past performances. But such information is sometimes obfuscated by “revelations” about their personal lives and peccadilloes.

The Olduvai Gorge in Africa is accepted by many as the original birthplace of all human ancestors. The gorge is found on the Serengeti Plain in northern Tanzania. Archaeologists and paleontologists have spent many years researching our greater family tree since Dr. Louis Leakey and his wife, Mary, found the fossils the Leakeys opined were evidence of our oldest known ancestor.

Competing evidence for human origins was discovered in the Afar Depression in Ethiopia on the continent of Africa by Donald Johanson, Yves Coppens and Maurice Taieb who named the humanoid bones they found “Lucy” and dated her at about three million years old. Regardless of what evidence one follows, virtually every recognized authority on human history agrees every person who has ever lived can be traced back to this area of Africa. For us to return to our roots we would have to visit our grandmother Lucy or perhaps some other related fossil nearby. I will not attempt to determine how many “greats” that is.

I do know if Lucy was anything like my mother was she probably wondered why it took a couple of million years or so before any of her fourteen billion descendants paid her any attention; why can’t those kids, grandkids, etc., ever write home?

Anyway, I got to thinking about Lucy when the media began to report on President Trump’s tweets about The Squad: Congresswoman Ayanna Pressley (Democrat, Massachusetts) born in Cincinnati, Ohio of African American heritage; Ilhan Omar (Democrat, Minnesota) born in Somali, Africa; Rashida Tlaib (Democrat, Michigan) born in Detroit, Michigan of Palestinian lineage; and, Alexandria Ocasio-Cortez (Democrat, New York) born in the Borough of Queens in New York City and of Puerto Rican parents.

President Trump tweeted out on July 14, 2019 that each Congresswoman should go back to their country of origin … “[A]nd help fix the totally broken and crime-infested places from which they came. Then come back and show us how it is done.”

In an interview with CNN’s Kyung Lah on July 18, 2019 Kamala Harris (Senator from California) born in Oakland, California who is an announced candidate for President of the United States in 2020 and who has African American ancestors said of President Trump, “He needs to go back where he came from. And leave that office.” Donald Trump was born in the Borough of Queens, New York City, New York and is of German and Scottish heritage. Although I do understand how people from one of New York City’s five boroughs may consider someone born in one of the other boroughs to be foreign born or someone from California may consider a native New Yorker an alien and vice versa and that those folks in New York and California may see the rest of America as one giant undeveloped wilderness. Regardless, here we all are. Maybe a little wisdom from Rodney King, that eloquent and forgiving victim of mob and police violence, may be in order. As Mr. King asked in 1991, “Can’t we all just get along?”