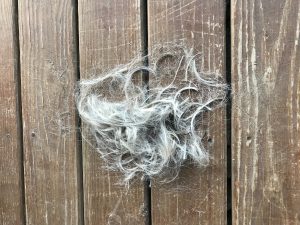 If a recession is when your neighbors lose their jobs but it is a depression when you lose yours, what is the analogy for our society’s losses due to ’Ole 19? Let me suggest that for Peg it was when she finally submitted herself to asking me to cut her hair. Yep, it’s complete capitulation; 19 can claim total victory. I should be able to show you photographic proof but it turns out that a wife’s hirsute humiliation is in the same category of bad husbanding as failing to separate the whites and colors for the laundry. No pictures of my artistry were allowed. In fact, Peg has found a new use for the flowered bandana she uses as a face mask; it now covers the top of her head too. And my attempts to assure her that within a few months her hair will grow back just seem to exacerbate the situation. Please allow me to digress.

Gentle Reader, you may have noticed it is hot in July and August near the latitude along the Mason-Dixon Line. Well Peg, who was born in upstate New York, had not quite acclimated to the previous weeks of 100-degree temperatures. Her Joan of Arc length hair tended to stick to her forehead and the back of her neck whenever she lugged water to her flowers and her vegetable garden. The martyr-type comparison will make sense by the time you finish the column. I was understanding and sympathetic, but my advice that Mother Nature would eventually provide rain was not received gladly. She stubbornly persisted and even suggested I could get involved if the TV re-runs of old golf matches didn’t interfere. Surely, we need not revisit that painful discussion.

The real problem is not me but ’Ole 19. Peg used to go to the beauty shop to get her hair cut. Or, when we still lived in Indiana, our daughter, Heather, who is a beautician would take care of it. However, now, as we do not wish to contribute to 19’s macabre statistics, we have socially isolated since our last foray out to eat which was March the 5th. We wear masks, we wash our hands, we ignore our friends and family, we shop online, we eat lots of tuna. But we both knew the Corona Virus had achieved complete domination when Peg said last week, “Jim, I just can’t stand this heat and having my hair string down my face and neck. Nobody but you is ever going to see me again anyway (I thought that a little overly dramatic) so you are going to have to cut it. Come watch these YouTube videos and try to pay attention.”

Well, it didn’t look that hard to me. I remember when I got my hair cut in Pawhuska, Oklahoma by Clyde Ensley or Bob Butts or in Mt. Vernon, Indiana by Steve Burris. Heck, it appeared about like cleaning a squirrel or a chicken. Just slice here, snip there, shear off the sides. No problem. After watching for ten minutes or so I was pretty sure I could give Vidal Sassoon a run. “Peg, get a towel and I’ll grab a pair of scissors and the electric clippers you used to use on our dearly departed dog and meet you on the front porch.”

It probably would have turned out better if Peg had not sat as if she were an unfortunate customer of an electric chair and if she hadn’t jumped and squirmed each time the clippers whirred and the scissors snipped. Regardless, in my unbiased opinion I did a fine job. If the bowl I used had fit better it would have helped. I can only guess at Peg’s opinion as she hardly has spoken to me for three days and when she does it is difficult to make out what she is saying amid the shrieks, sobs and expletives as she tries to pull her hair back to its former length. 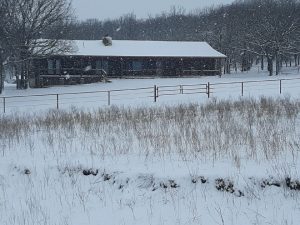