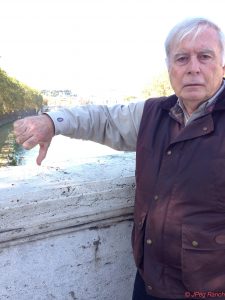 In 49 BC the Senate in the Republic of Rome ordered Gaius Julius Caesar to not bring his army across the Rubicon River into the city of Rome. Caesar said, “Let the die be cast”; that is, I’ll take my chances. He did, Rome as a Republic collapsed into civil war and instead of a representative government the Roman people got a dictator. Five years later, on the Ides of March, Caesar was deposed by force.

The people who founded the United States of America came from a tradition of great fear of military power over civilians. In fact, in our Declaration of Independence one of the main complaints against King George III was that, “He has affected to render the military independent of and superior to the civil power.”

This great fear of military control over the civilian populace of America was guarded against in our Constitution. Article I, section 8 endows Congress with the power and authority to declare war, and to raise armies and militias to suppress insurrections. Article II, section 2 establishes that the democratically elected President shall be in control of the armed forces as the Commander-in-Chief.

In his exhaustive and exhausting treatise, The Framer’s Coup, The Making of the United States Constitution, Professor Michael J. Klarman points out the vital importance to our Founders that “[I]n all cases, the military should be under strict subordination to, and governed by, the civil power.” See p. 330.

We Americans profess pride in and support of our military as long as we are assured our military remembers its place. That system has worked pretty well and we are likely to maintain it in spite of political pressure being brought upon the generals to undermine their Commander-in-Chief. As I recall from my service days, I did not always recognize as wise what my military superiors thought was wisdom. Joseph Heller in his prescient novel, Catch-22, had a pretty firm grip on the banality of much of the military. On the hand, our politicians sometimes also fall a little short of a full deck. Still, at least we have the opportunity to have some say in who our civilian leaders will be and we can fire them.

Therefore, for me, I’ll chose to bob and weave with the occasional civilian loser versus a palace military coup. Back off oh ’ye purveyors of a Banana Republic. As Scarlett O’Hara said, “Tomorrow’s another day” and as Annie said, “Tomorrow is only a day away.” I can wait. Elections, yes, coups, no.