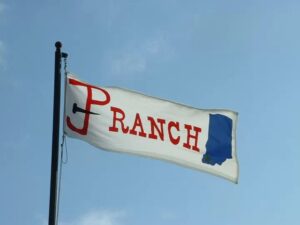 Therefore, we were pleased when we received an email from Mt. Vernon, Indiana high school senior, Carlton Redman, saying he had read our book JUDGE LYNCH! that we published in 2008, and for which my sister Jane nee Redwine Bartlett wrote the poignant Foreword. Carlton asked if I would participate in a Zoom call with his English class to discuss the book’s exposé of the long hidden horrific murders of seven Black men in Posey County in 1878; we were gratified for his interest. Carlton’s Redman family has deep roots in Posey County and his grandfather, Carl J. Redman, is an old friend of mine. Carlton’s uncle, Robert Redman, served as my court bailiff for several years. Another of Carlton’s uncles, Martin Ray Redman, was not only a fine public servant but also one of my best friends. Carlton’s cousin, Greg Redman, played baseball and graduated with our son, Jim, from Mt. Vernon High School. And, Dave Pearce along with his wife, Connie nee Redman Pearce, have carried my newspaper column, “Gavel Gamut”, in the Posey County News for many of the column’s 32 years and over 900 articles. In other words, unbeknownst to Carlton before he contacted me, the fine Redman family and my family have many pleasant connections and his aunt and uncle’s newspaper has often helped tell the story of the 1878 lynchings.

But that’s not why Carlton contacted me. He had been assigned by his teacher, Mary Feagley, to do a classroom project and he chose to investigate Posey County’s long and interesting history by reading our book and then having me appear in his class via the Internet on December 16, 2022 to discuss it. I was honored to do so as our son received a fine education from the Mt. Vernon school system and we have only good memories from his time there and our time in Posey County.

Gentle Reader, I hope you have read or will someday read JUDGE LYNCH! which is a historical novel, but refers to much of Posey County’s rich history. That Ms. Feagley has guided her students to know their own history gratifies but does not surprise me. Mt. Vernon High School has had several excellent teachers, such as Jerry King, who know our future is determined by our past and we need to know it, both good and bad.

In fact, Jerry and his wife, Marsha, appeared in the movie we made in 2011 about the murders of 1878. They reenacted General and Mrs. Alvin P. Hovey and even furnished their wonderful Pioneer Village for sets for the movie, for which my brother, C.E. Redwine, did the haunting music. Numerous Posey County and Evansville, Indiana residents volunteered their time and effort in the movie to help bring the previously hidden and forgotten terrible events of autumn 1878 to light. In fact, that movie premiered in my hometown of Pawhuska, Oklahoma at the Constantine Theater on June 11, 2011 at the First Ben Johnson Film Festival and has been shown several times in New Harmony, Indiana and elsewhere since then. JUDGE LYNCH!, its sequel, Unanimous for Murder published in 2021 that incorporates history from both Posey County and Osage County, and the movie are available at the Alexandrian Public Library in Mt. Vernon and Capers Emporium in New Harmony, Indiana. In Oklahoma they are available at the Pawhuska Public Library, the Osage County Historical Society Museum and Woolaroc Museum. And then, of course, from our website, www.jamesmredwine.com.

Carlton, his teacher and his classmates are helping the community remember what we must not forget, ignore or repeat. Thank you Carlton and Ms. Feagley. I was honored to serve forty years as a Posey County Judge and was honored to have JUDGE LYNCH! used to help preserve and expose our history.

Now that we live in Oklahoma we occasionally get to re-visit southern Indiana and see family and friends there. These times are rare but valued treasures, just as we used to feel when we lived in Indiana and visited Oklahoma. What Peg and I have found to our delight is that if one lives in both Posey County, Indiana and Osage County, Oklahoma, you have two homes and you CAN go home again, repeatedly.