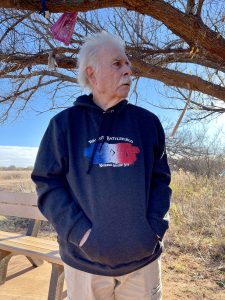 “Throughout the 200-year history of the United States the American nation has been at war.” That was how author William Koenig led into his 1980 book, Americans at War. Although ostensibly a study of American warfare from about 1775 at Lexington and Concord to 1975, the end of the Viet Nam War, Koenig actually starts with the arrival of the Mayflower in 1620 and Native Americans meeting the ship. Had he waited until today to publish he could have included another fifty years of Americans at war, right up to Ukraine.

In general, we Americans view our involvement in foreign wars, that is, non-Native American warfare, as justified by the belligerence of others who have forced us reluctantly into “making the world safe for democracy.” The beginning of our provision of armaments, intelligence and training to Ukraine dates back to soon after the fall of the Berlin Wall and the “breakup” of the Soviet Union. The current U.S. commitment of over 50 billion dollars is only a fraction of our huge military and economic support for Ukraine over many years. Russia has often taken note.

George Soros, the Hungarian born American billionaire, stated on May 24, 2022 that the Russia-Ukraine war may be the start of World War III and result in the end of human civilization. Such doomsday statements are not a new phenomenon. Ever since the days of The Flood people have warned that human behavior, usually by someone other than the Jeremiad of the moment, was going to lead to the end of the world. They mean the end of homo sapiens’ short 200,000-year reign on our 4.5-billion-year-old planet. Earth will survive, but without us.

I have no estimate how many predictions of mankind’s demise have been made from the time of our common really great-grandmother, Lucy, in Africa until 1945. Until America came up with and used the atom bomb, the philosophers who had previously cried wolf were doing just that. However, now with numerous countries possessing nuclear weapons and itching to use them, we may have finally made honest men out of Noah and all the other survivalists. I am not going to address climate change and pollution as doomsday machines as I only have about three pages of print available. I will stick with nuclear war in this column.

With nuclear powers, such as Russia, North Korea, China, America and Israel all claiming they fear for their survival, I am reminded of my onetime acquaintance who told me in 1973 that if Egypt were about to destroy Israel that Israel would be justified in destroying the whole world to avenge itself. Fortunately, he was not an Israeli and Egypt stood down. I do wonder if Putin might feel so threatened he would believe Russia would be justified in starting the nuclear daisy chain.

These thoughts of World War III came scrambling into my brain when I thought about June 06, 1944 and D-Day. Americans and many others thought the World War of 1914-1918 with its inane carnage, over no one knew what, was going to end world-wide war. Then the courage and sacrifice of 150,000 American soldiers on D-Day was touted as the beginning of the end of totalitarian regimes. Later we thought we had learned something from Korea, Viet Nam, Iraq and Afghanistan. Now, George Soros, hardly a war monger, fears we may be at the beginning of WWIII raging in Ukraine.

As for me, I will place my confidence in that part of human nature that has pulled us back from self-immolation many times. History leads me to have faith we will not self-fulfill such a dire prophecy. Of course, if I am right everyone will be around to say so, and if I am wrong, what difference will it make?

In his book Letters From The Earth, Mark Twain has Noah making an extra trip in the Ark so he could save the housefly that spreads typhoid fever. I could not find any reference to scorpions in the Book of Genesis nor in the account of the Great Flood that also appears in the Quran. However, Noah, or in Arabic, Nuh, must have heroically preserved the “creature with the burning sting” as I stepped on one in our cabin at JPeg Osage Ranch last night. If Satan had stepped on a scorpion with bare cloven hoof, I bet he would have sent a scathing letter to heaven from his temporary banishment on Earth. Perhaps then either St. Michael or St. Gabriel, the Devil’s correspondents, might have pointed out to the Creator that His creation of the scorpion was a bust.

The Latin name, scorpion, given to the eight-legged arachnid with the pinching front claws and the stinging tail aptly describes the menace that apparently has no value except to encourage one to wear shoes in the house. Except for me, scorpions have few natural enemies other than lizards and tarantulas; choose your poison.

What I want to know is whom did Mother Nature put in charge of species extinction and why hasn’t She extinguished scorpions? Scorpions have been around for 435 million years and, I humbly suggest, that is long enough. According to Google (who else are you going to rely on), extinctions are a normal part of evolution. They occur naturally, periodically and somewhat regularly. We Homo sapiens would not be here if millions of other species, dinosaurs for example, had not gone extinct before we came out of the primordial ooze two to three hundred thousand years ago after two to three million years of genetic iterations of hominids.

I submit it is fair to ask Mother Nature, “What were you thinking?” Much like the White-Tailed Hornet of poet laureate Robert Frost’s poem, it appears to me whoever designed the scorpion should have gone back to the drawing board, or better yet, file thirteened the whole thing. The white-tailed hornet (or scorpion) might be viewed romantically by nature lovers who assume infallibility or even lovability in all of nature’s creations. But Frost (1874-1963) watched in disillusionment as a white-tailed hornet in search of a fly to eat repeatedly attacked both the head of a nail and Frost’s nose. As Frost concludes about nature and life in general, once we begin to see the fallibility of the natural world “reflected in the mud and even dust” we can no longer convince ourselves we humans are only a little lower than the angels and are probably no higher than creepy crawlers on the floor.

The white-tailed hornet lives in a balloon (nest)
That floats against the ceiling of the woodshed
…
Verse could be written on the certainty
With which he penetrates my best defense
Of whirling hands and arms about the head
To stab me in the sneeze-nerve of a nostril
…
I watched him where he swooped, he pounced, he struck;
But what he found was just a nail head (not a fly).
…
Won’t this whole instinct matter bear revision?
To err is human, not to, animal.
Or so we pay the compliment to instinct.
…
’Twas disillusion upon disillusion.

In much the same manner as Frost’s hornet, did that scorpion on my cabin floor mistake me for either dinner or a possible mate? Why bother me at all? When it should have been gainfully employed in more reasonable pursuits it was not using any reason and we both suffered for its frailty.

The Greek astronomer Ptolemy identified the constellation Scorpius in the 2nd century A.D. Why didn’t Mother Nature take that as a clue to make scorpions extinct 2,000 years ago? Even Nancy Reagan with her reliance on astrology for advice to her husband on affairs of state might have used her influence to have “Scorpio” disappeared from our existence by bringing the power of the federal government to bear. After all, our federal government killed off generations of eagles and other more cuddly species than scorpions with DDT. Why did scorpions escape?

I am glad the bison somehow miraculously survived mankind’s slaughter but do wonder what if any reason exists to preserve the scorpion. I guess it comes down to “Only the good die young” and we humans have been around about 430 million fewer years than the scorpion. We will probably be gone long before scorpions pass.

On the other hand, perhaps I can convince Jeff Bezos and Amazon to help me market scorpions to the public as pets. Hey, entrepreneur Gary Dahl got rich back in the 1970’s by convincing people a rock could be a loving pet. Maybe a slogan such as “Get Your Zing Avoiding a Sting” could be catchy. Or maybe I could sell them as a great gift idea for misanthropic people or dry them out and make necklaces from them. I see all kinds of people sporting plastic human skulls on their belt buckles or as tattoos.

Of course, if I were able to get such an enterprise going the government would just regulate it out of existence or tax it to death. Well, at least I could get rid of some of the crunchy little crustaceans that way. In the meantime, I guess I’ll just need to wear my shoes and watch my step.