As many of you, my first job for pay was mowing neighbors’ yards. My brother Phil and I would start the first week after school let out, usually about June 01, asking around for jobs. We charged $2.00 for mowing and trimming a house and yard on one or two lots. The lots were 25’ wide by 100’ long and since this was always summer in Oklahoma the trimming required was minimal; flowers were pretty much hoped for only. Still, trimming with mechanical hand trimmers was a worse job than mowing so Phil and I alternated who did which.

Our business plan originated when I was 9 and he was 10. It began when Dad finally scraped up enough money to replace our ancient mechanical push mower with a power push mower. We went from one or two yards per week to 5, sometimes 6. The gasoline engine used leaded gas and the tank held one quart which was enough for one lot. We usually had to refuel at least once. Gasoline cost less that 20 cents per gallon. A 5-gallon can could be filled for 1 dollar. You can readily see how the net income ran into double digits.

Of course, we had to be up before sunrise and load the gas can onto our wagon so we could walk it the one mile, each way, to a gas station. One problem we sometimes encountered was we would have spent all of our profits from the previous week on pop and snacks or shells for our 22 or 410 for rabbit hunting so we had to have Mr. Hamlin who owned the station front us the fuel.

This first business was pretty good but we yearned for higher goals, that is, more money and less work. So when our Mother told us a lady, Mrs. Juby, from church needed kitchen workers in her restaurant we transitioned from mowing to actual jobs, 50 cents per hour and one meal. Dad said o.k. but we still had to mow our own yard.

Mrs. Juby’s restaurant was one of those iconic small-town eateries. A few plastic covered booths along two walls and a counter down the middle with backless stools along with a menu of plate lunches, always including mashed potatoes. Phil and I had no idea how many potatoes it took to feed the luncheon crowd of one small town. Also, we were tasked with washing the huge kettles and pans the potatoes were washed and boiled in.

Everything went okay for us at first because we knew our place. Mom told us just do what Mrs. Juby said and don’t embarrass the family and Phil and I were pretty handy with paring knives due to all the squirrels and rabbits we had cleaned plus Mom had made sure we were familiar with washing pots and pans long before we got paid for it.

For a few weeks in the summer between my 6thand 7thgrade years Phil and I peeled potatoes and washed pans like the professionals we were. One thing Mom had taught us over the years was how to properly clean and peel potatoes. Most importantly, we knew all bad places, rotten parts, were to be removed. Unfortunately, Mrs. Juby saw the removal of potato parts as an attack on her profits, kind of like Phil and I might have seen the waste of a tank of gasoline.

So, one busy lunch hour we were assiduously washing pans and peeling potatoes when I came across a large spud that was mainly black and mushy. As I was eliminating about 90% of the potato Mrs. Juby burst into the kitchen with her apron flapping. Then when she saw the small remnant of potato I was contributing to the mashing pile her jaws matched her apron. “Jimmy! What are you doing? I’m not made of money you know. Is that why I have had to buy more potatoes? And you Philip! How could you let your little brother waste food like that? Well, I am going to let your Mother know about this. Finish with lunch then you don’t need to come back tomorrow!”

Well, Gentle Reader, my first real job was grand while it lasted, but not nearly as grand as the job I just finished. Thank goodness Mrs. Juby was not voting in Posey County the past 38 years! 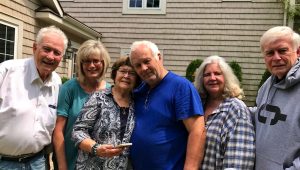