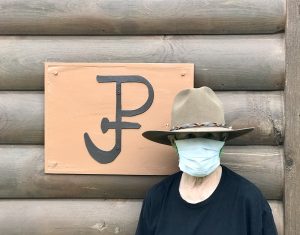 On Saturday mornings at the State Movie Theater in Pawhuska, Oklahoma in the 1950’s you could see a black and white double feature western where the good guys wore white hats and the bad guys wore black masks. The lines were not blurred. Cowboys, good; rustlers, bad. Lawmen, good; bandana wearing holdup men, bad. No mask, good; mask, bad.

Today society has divided into two warring factions that are as defined as those satisfying old movie plots but which are themselves not very satisfying. One group champions masks as proof of one’s concern for others and the other group eschews masks as unnecessary and an infringement on individual liberty. However, most of the members of both groups still view cowboys as the good guys.

In my family we had my mother’s youngest brother, Uncle Bud, a rodeo cowboy who roped calves and steers. He was one of my heroes even though the mean billy goat he used to practice his roping often butted me across the roping arena.

Another of our family’s cowgirl heroines was and is my oldest brother’s wife, Shirley Smith Redwine. Sister Shirley competed in barrel racing, pole bending and flag racing for several years at the International Roundup Cavalcade in Osage County, Oklahoma. Shirley was a member of both the Turley, Oklahoma and Sand Springs, Oklahoma round up clubs and she competed as a queen candidate several times. Shirley’s mother, Esther, designed and sewed Shirley’s fancy outfits and Shirley’s father, Hollis, trained her horses. She competed from age twelve until her freshman year at Oklahoma State University where she met my brother, C.E. Redwine, who managed to win Shirley’s heart with his saxophone and ended her rodeo career.

But Shirley has always remained a cowgirl at heart. She knows right from wrong and has always fearlessly championed the right. Cowboys are supposed to stand up and be counted. Shirley did just that when Covid-19 struck our world. She put her sewing skills to work and made masks for our whole family. Now I do not know how many other cowboys and cowgirls have mounted up to confront ’Ole 19, but I believe true cowboys and cowgirls are not afraid to stand up against any evil. So, cowgirl Shirley, thanks for the masks. Peg and I follow your lead and wear them whenever we go out and about. We do notice there are some folks who do not wear masks. Maybe the rest of the good guys can help get the message out until ’Ole 19 goes the way of the Saturday morning horse operas.

My Mom’s three brothers and one of her three sisters served in the Army during World War II (1941-1945). Aunt Betty was a nurse, Uncle Bud, who was a rodeo cowboy, was in the cavalry, Uncle Buck flew close air troop support over Europe and Uncle Bill killed and saw killed way too many men from Anzio to Germany. Mom sent any extra we had, and some not so extra, to support her siblings and their comrades.

My Mom’s Mom’s Mom’s father, my great-great grandfather immigrated with his parents from Bern, Switzerland in 1852 when he was fourteen. His father served as a career soldier in Switzerland for 21 years. They settled in LaGrange, Indiana.

My great-great grandfather, John Giggy, enlisted in Company H, Forty-Fourth Indiana Volunteer Infantry on August 28, 1861. His first major battle was Fort Donalson then he was wounded at Shiloh and sent to the military hospital in Evansville to recover.

After a short furlough he rejoined his regiment in Murfreesboro then at Chickamauga was wounded in the hip on September 19, 1863, after which he walked back to Bridgeport, Alabama using a bed slat for a crutch and having nothing to eat for 3 days but 3 crackers. He was then ordered to the hospital in Nashville before being furloughed again until he rejoined his regiment at Chattanooga on December 31, 1863 (Happy New Year?)

He continued fighting and marching, marching and fighting until mustered out at Indianapolis in October 1865. He became a farmer and a stone mason and fathered 9 children including my great grandmother, Agnes (Giggy) Vulgamore.

Thereafter he simply went about his life without thinking his country owed him anything more than a fair opportunity to raise his family and be left alone.

I never had the chance to meet him but I am confident his toughness helped buy me and my siblings a better life. Thanks to Grandpa, Aunt Betty, my uncles and all the other tough and non-assuming veterans who did their duty so the rest of us could do things they could not have dreamed of.