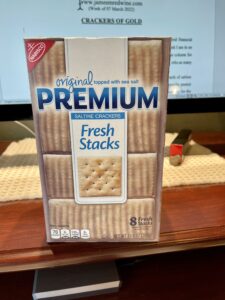 Over the years I have managed to enter the market on the backend of several financial bonanzas. I passed on pet rocks in 1975 and have regretted it for fifty years. But I think I am in on the ground floor of the next gold rush, saltine crackers! Those of you who read this column for advice on how to retire early may wish to listen up. That group does not include Peg, who as many spouses, does not recognize my genius when it arises.

I happened to notice about a couple of months ago that America had a dearth of saltine crackers. Saltines are important to me, and maybe you too. My fallback diet is crunchy peanut butter on crackers. It is quick, easy, tasty and there is no clean up required. Unfortunately, for the last couple of months I have encountered empty shelves at Dollar General and even Walmart when I searched for saltines. And even though I have researched the topic vigilantly, via Google, I cannot find a rational answer to my plea, “Where are the crackers?”

So, when I found a box at Hometown Foods, see the photo for proof, I grabbed it. I felt like I had discovered that first nugget of gold at Sutter’s Mill in 1848. My excitement was dampened by Peg’s response to my plan to try to corner the market, at least within twenty miles of our cabin, on saltines. When I called our son, Jim, who is our financial advisor, he once again sided with Peg. I explained to him I wanted to convert my IRA to cash and buy all the saltines I could find. He mumbled something about a guardianship and hung up.

As you know, Gentle Reader, no prophet is known in his own country, but I can clearly see our barn filled with boxes of saltines, if I can find them, that will jump in value each day, especially with that maniac Putin destroying our stock market as he tries to destroy Ukraine. Now is the time to reach for that brass ring I have just missed out on so many times before.

So, darn the torpedoes and full speed ahead. And if you wish to invest with me in my plan to corner the market on saltine crackers, you better hurry because I can feel the rest of America about to jump on the roller coaster. Please do not mention any of this to Jim or Peg.

Take a block of marble and chip away everything that isn’t an elephant. The same principle applies with chili made by Yankees.

When the United States Air Force stationed me at Indiana University to study Hungarian I arrived with a solid foundation in chili. My previous life had been pretty much confined to Oklahoma and Texas where chili was to cuisine as basketball was to Hoosiers. There was none of this nonsense that chili is to be eaten only in wintertime.

In the southwest we ate chili year round and all day long. Chili on eggs at breakfast. Chili poured in a bag of Fritos for snacks. Chili at wedding receptions. Chili at church potluck dinners. Bricks of frozen chili at scout camp.

Chili was a health food. It was served to colicky children and constipated seniors. If the ancient gods of the Greeks and Romans had discovered chili they would have looked askance at ambrosia. The true Land of Milk and Honey can be found in the chili parlors along the banks of the canal through downtown San Antonio.

So, Gentle Reader, you might grasp my befuddlement when I ate my first meal at Indiana University and saw a sign on the chow line announcing that chili and grilled cheese sandwiches were being served, but when the nice lady behind the counter handed me my bowl of “chili” it had large red and white things floating among the greasy gunk.

“Ma’am, I don’t know if you noticed but there’s some strange stuff in my bowl.”

“Uh, it has red and white globs swimming in it.”

“Those are red kidney beans and macaroni.”

Then I met Peg who not only was from east of the Mississippi she was also a Yankee from above the Mason-Dixon Line. Fortunately for me, we got married before she ever cooked for me the first bowl of what she called “chili”. She added celery to the kidney beans and macaroni. At our home, a pot of chili calls for two pots now: one for the chili I make and one for whatever you call what Peg makes.

Over the years I have spent in this Hoosier heaven for everything but chili I have had friends serve me chili with tofu, eggs, potatoes, kidney beans, white beans, chicken, sugar, macaroni, spaghetti, and a lack of cayenne pepper. Enough! Chili is shredded beef or hamburger, browned then drained. Sautéed onions, water, salt, black pepper, chili powder, garlic, cumin, cayenne pepper, tomato sauce and, for some, chili beans are slowly added to the sizzling meat and then masa flour added at the very end to thicken the mixture. It is simmered for a minimum of two hours then served with Fritos or corn tortillas with hot sauce, preferably Tabasco, chopped raw onions and shredded cheese on the side. THAT IS ALL! That is chili!

(Folks, this is Peg. I’m the lucky person who gets to type and edit these Gavel Gamut articles. I just can’t let you get the wrong idea this time. I had never heard of chili with macaroni or spaghetti either until I moved to Hoosierdom! In Yankeeland we made our chili with browned and drained hamburger, kidney beans not chili beans, tomato sauce or tomato soup, a little bit of ketchup, chopped celery and onions, salt and pepper and maybe a dash of chili pepper if we felt daring. Chili is served with Saltine crackers, not Fritos. That’s the difference between Yankee chili and my Dear JJ’s southwestern chili!)