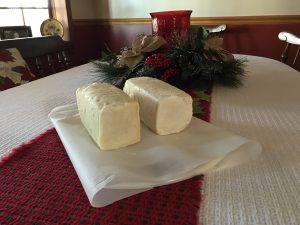 It may not be the “Constant variety of sports” or the “Human drama of athletic competition” as promised by ABC’s Wide World of Sports, but Jim and Stephanie Spann’s New Harmony Soap Company provides a fun learning experience and great smells. Peg and I now know how to make soap and we have the aromatic masterpieces to prove it.

When Peg told me she had signed us up for a three hour soap-making class for this past Saturday my first thought, which I prudently kept to myself was, “Well, there goes my day off”. It was held at the New Harmony Soap Company on Main Street and was taught by the Doctor of Saponification, Jim Spann.

Saponification is not a misspelling of the great Italian sausage, soppressata, which is what I secretly hoped when Professor Spann started his lecture with the term. Turns out it is an ancient Latin term for soap-making. According to Jim we humans have been trying to remove the grit and maliferous substances from our bodies with homemade soaps since, at least, Babylonian days about 5,000 years ago, probably about the time that human population began to increase.

My first memories of soap-making involve our Pawhuska, Oklahoma neighbor lady, Mrs. Caldwell. I do not know her first name as when I was a child adults did not have first names. Today, complete strangers address everybody by first names and even the President of the United States is “The Donald”. But the demise of polite society is stuff for another column. For now, we are addressing the wonderful world of soap-making.

Whereas Mrs. Caldwell brewed her lye soap in a galvanized tub over an open fire in her yard next door to my family home, Peg and I were carefully and skillfully instructed in the use of electric hot plates and stainless steel pots.

Instead of hours of stirring her concoction of sodium hydroxide, water and lard as Mrs. Caldwell did, Peg and I had the use of electric mixers. And our lard was supplanted with coconut oil, palm oil, sunflower oil and shea butter mixed with distilled water and a cornucopia of interesting scented oils, such as clove, nutmeg, cinnamon, eucalyptus, rosemary, peppermint, etc., etc., etc.

Once I accepted my fate of a Saturday without football or simply vegetating on the couch, my next fear was of falling into the remedial group of soap makers. No problem. The process was so easy even a judge could follow it. Although Peg was always at least one step ahead of me, no one else seemed interested in my progress. It was truly a lot of fun.

If you are looking for something different to do right here in Posey County, I highly recommend the Spann College of Saponification in New Harmony. The New Harmony Soap Company has 4 more soap-making classes coming up; 2 in February and 2 in March. And while I am in no way intimating you might have a need for it, you might smell better too.