"Judge Redwine brings a lifetime of keen observation and effort to understand the human condition to both his historical fictions and Gavel Gamut columns. The results are always compelling."
* The Posey Observer *

Donald Trump has declared he will make a third run for the presidency in 2024. Joe Biden claims he will seek re-election. Several Republicans, Ron DeSantis, Mike Pence, Mike Pompeo, and others are not so secretly hoping lightning strikes them, or maybe strikes Trump. Democrats Gretchen Whitmer, Kamala Harris, Cory Booker, and others are feigning fealty to Biden but may be looking wistfully at the effects of Father Time. In other words, American politics remains unchanged from the days of Jefferson and Adams. It also has regenerated its tiresome media circus of peeking under tent flaps and salivating at the probability of political gaffs. So, buckle up or just tune out for the next two … END_OF_DOCUMENT_TOKEN_TO_BE_REPLACED

The United States and Russia have been jockeying for position in Ukraine since, at least, 2014. Three American presidents, Obama, Trump and Biden, and one Russian president, Putin have been in power during this period. According to a publication of the Congressional Research Service updated on October 21, 2022 the United States has, up to October 14, 2022, provided $20.3 billion in “security assistance” to Ukraine. As one can observe on CNN, Russia has destroyed large swaths of Ukrainian territory and Google projects if the war ended now it would cost between $100 billion - $200 billion dollars to reconstruct the damaged areas. The human cost was not considered but it is immense. Ukraine’s … END_OF_DOCUMENT_TOKEN_TO_BE_REPLACED

One of the advantages of working in the former Soviet Union country of Georgia is that Peg and I spend our time where a great deal of history was made. It is not that the United States does not have an interesting story to tell. But the good ’ole US of A cannot legitimately lay claim to be the birthplace of wine as Georgia does or the birthplace of the Holy Roman Empire as does Georgia’s neighbor, Turkey. And one exciting aspect of being in a part of the world where so much of our history was made is that new discoveries of old history are being uncovered everyday. For example, it was recently reported that archeologists unearthed an ancient mosaic beneath the floor of a church in Demre, … END_OF_DOCUMENT_TOKEN_TO_BE_REPLACED

What is wrong with the American political system? Why are people so upset? Are we living in the End Times, the dreaded Eschaton? Why is Kanye West (Ye) such a pariah to many and a voice crying in the wilderness to some? Will Donald Trump save America or destroy it? How about Joe Biden? Was that referee blind when he called pass interference against my team or maybe he had a bet on the game? Really, can someone explain to me how anyone can see any possible redeeming value in talking to Putin? We probably ought to just go ahead and push our button before he does his. And, what is it about lawyers? If I hear one more attorney say to me, “On the other hand,” I am going to throttle him. There is … END_OF_DOCUMENT_TOKEN_TO_BE_REPLACED

I wrote the first of my over 900 “Gavel Gamut” columns in 1990 at the request of my friend, Jim Kohlmeyer. Jim was the Posey County, Indiana Republican Party Chairman and the owner of the New Harmony Times newspaper (now The Posey County News owned by my friend, Dave Pearce). Jim had recently purchased the paper and was desperate for filler. He asked me, the Democrat, elected, Posey County Circuit Court Judge, to write a column about “legal topics.” Jim did not care what I wrote. Since 1990 and every week since April of 2005 I have written about topics from local heroes to national issues as I saw fit. As those of you, Gentle Readers, will note, in several of my burnt offerings my wife, … END_OF_DOCUMENT_TOKEN_TO_BE_REPLACED

Peg and I were in our apartment on the seventeenth floor of our 90s-Era looking building at 6:30 pm (9:30 am Central Time) in Batumi, Georgia yesterday when the whole gigantic complex quaked and my chair, with me in it, moved. Peg had been out on the tiny open-air balcony watching hearty Georgians swimming in the Black Sea. She came right inside shaking about as much as the apartment. We had experienced earthquakes before in Indiana and Oklahoma so we realized why we suddenly had a complete loss of control over our lives. Peg heard a loud crack while I, as oblivious as usual, just existed through the moment. It takes a lot of power to cause a 42 story high-rise apartment building to move … END_OF_DOCUMENT_TOKEN_TO_BE_REPLACED

If you have traveled by commercial aircraft recently you can only marvel at the British security measures for the Queen’s funeral queue. From September 14 to September 19 about 250,000 people lined up for up to 24 hours to view the Queen’s coffin for less than one minute. Other than one fool who tried to touch the flag on her coffin and was immediately arrested, I am not aware of any “security incidents”.  In other words, our English cousins managed to process about 50,000 people a day without so much as a scuffle. Now compare that to the airlines’ inability to keep many thousands, perhaps millions, of people from losing their luggage and missing their connecting flights while being prodded … END_OF_DOCUMENT_TOKEN_TO_BE_REPLACED

On February 04, 2022 Russian President Vladimir Putin, on an invitation from Chinese President Xi Jinping, attended the China Winter Olympic Games in Beijing. Twenty days later Russia invaded Ukraine. Nancy Pelosi, the Speaker of the United States House of Representatives, in response to an invitation, visited Taiwan over China’s objections on August 2, 2022 and China immediately responded with massive military maneuvers around Taiwan. Russia has now been at war with Ukraine for over six months. Ukraine has been supplied with many billions of dollars’ worth of military hardware by America before and during the war. Taiwan has recently received a pledge of over one billion dollars’ worth of … END_OF_DOCUMENT_TOKEN_TO_BE_REPLACED

When former President Donald Trump moved out of 1600 Pennsylvania Avenue in Washington, D.C. he took fifteen boxes of stuff with him that he stored at his Mar-a-Lago home in Florida. Someone tipped off the FBI that the boxes were stashed in some closets. Who might that have been is one of the matters the FBI and the Department of Justice wish to keep confidential. That information is most likely part of what was redacted from the Affidavit that was filed with the application for the Search Warrant. We in the general public, therefore, do not know who the source was; I certainly do not. However, I do have a theory for your consideration, Gentle Reader. It is reported that the 15 boxes … END_OF_DOCUMENT_TOKEN_TO_BE_REPLACED

On August 08, 2022 the FBI executed a search warrant at former President Donald Trump’s residence, Mar-a-Lago, in Palm Beach, Florida. That is about the extent of what we in the general public know about the situation. There is a great deal of speculation about the process but very little of that speculation is likely to be unbiased. The search of any former president’s home would of necessity be embroiled in competing political interests. Many important issues are in play and countless questions arise. We in the general public may be greatly affected by the search and the motivations for it or there may be no great significance to our democracy. We do not yet know the basis for the search … END_OF_DOCUMENT_TOKEN_TO_BE_REPLACED

Tom Nichols is a staff writer for The Atlantic magazine. In his opinion piece of August 15, 2022, Nichols asserted the United States is living in a “new era of political violence.” Nichols compared our current political climate to America’s Civil War and declared: “Compared with the bizarre ideas and half-baked wackiness that now infest American political life, the arguments between the North and the South look like a deep treatise on government.” Of course, Nichols, as all of us do, meant those ideas he disagreed with. He wrote his article as a warning against “the random threats and unpredictable dangers from people among us who spend too much time watching television and plunging down … END_OF_DOCUMENT_TOKEN_TO_BE_REPLACED 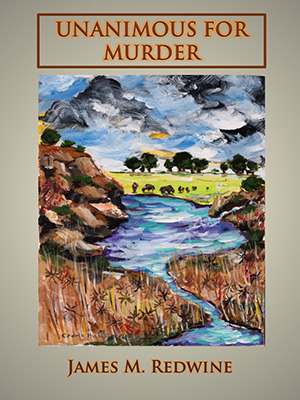 Live on Amazon.com and Kindle eBooks!

Echoes of Our Ancestors: The Secret Game 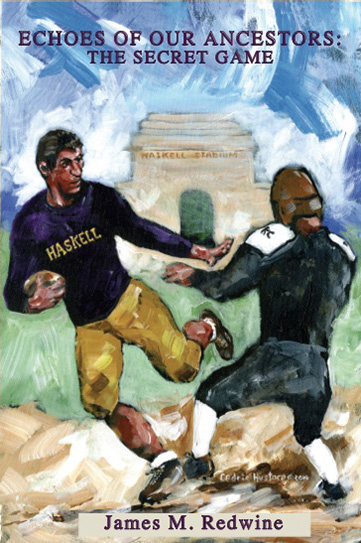 Jim’s new novel tells the exciting story of a long hidden but important football game that occurred between representatives of Haskell Indian Institute (now the Haskell Indian Nations University) and professionals from the then Kansas City Cowboys in 1924 at a secret location on the Osage Indian Nation near Pawhuska, Oklahoma - where Jim was born. 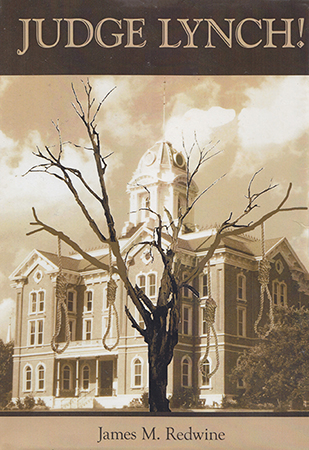 “Judge Lynch Holds Court!” That was the banner headline in a Posey County, Indiana newspaper after seven African American men were murdered by a white mob during October, 1878.
See More... 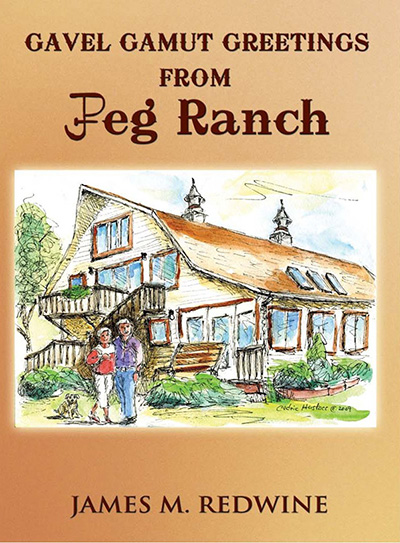 “Gavel Gamut Greetings" is an anthology of topical and historical selections mainly about regional events and personalities that have appeared in my weekly newspaper column, Gavel Gamut.
See More...