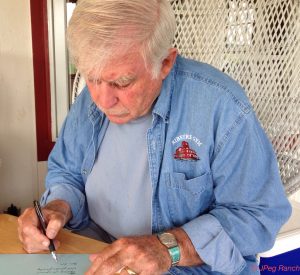 “Judge Redwine portrays Posey County as a microcosm of the United States.  He is trying to encourage an atonement and catharsis for the local area which might provide a blueprint for the whole country.” – Walt Jordan

James M. Redwine was born on the Osage Indian Nation in Pawhuska, Oklahoma. A graduate of the Indiana University School of Law, he has been licensed as an attorney in Indiana for more than 50 years and was recently admitted to the Oklahoma Bar. He was a Posey County, Indiana judge for more than 38 of those years and served 2 years as a Senior Judge for the State of Indiana.

His weekly column, “Gavel Gamut”,  is featured in local Oklahoma, Indiana, Illinois and Missouri newspapers. He was the recipient of the 2020 first place columnist for newspapers of limited distribution in the state of Oklahoma.

He is also on the faculty of the National Judicial College in Reno, Nevada and has taught many judges from the United States, Palestine, Jordan, Bahrain, Russia and Ukraine. He currently is serving in the country of Georgia under the auspices of the American Bar Association, the USAID and the East-West Management Institute to further the independence of the Georgian Judiciary.