Just before the Fourth of July last summer and, of course, before ’Ole #19 raised its ugly head, Peg and I attended a rodeo in Osage County, Oklahoma where thirty-five competing cowboys were introduced as they held a gigantic American flag in the middle of the arena. While a cowgirl on horseback sang “The National Anthem” each cowboy stood at attention as he helped hold the flag with one hand and pressed his Stetson over his heart with the other.  It was a moving experience for Peg and me as we stood at attention with our hands over our hearts. It made me think about the National Football League and silent protests by players as well as raised fists at the 1972 Olympics and members of the USA’s women’s soccer team who choose to stand but not place their hands over their hearts. What a feeling of freedom it should give us all when our fellow citizens peaceably and respectfully voice their dissent even if we disagree with their positions. Dissent by others, especially by those diametrically opposed to my beliefs, helps to remind me Independence Day is one of life’s greatest gifts and reinforces my gratitude to our Fourth of July 1776 heroes. It makes me think of James Madison and his demand that the first ten amendments to the Constitution be adopted.

The First Amendment is the ultimate recognition of the importance of choice: freedom of and from religion; freedom of speech; and, the freedom to peaceably assemble and petition our government whether in writing or by demonstration. I am proud that in the United States of America if Peg and I want to stand for “The National Anthem” or for any other cause, such as “The Hallelujah Chorus” or our favorite school’s fight song, we may. And if others do not wish to, they have the right not to.

For some reason that rodeo experience reminded me of what our soldier son, Jim, told us he observed when he visited the old Soviet Union before the wall came down and before he was sent to war in Iraq in 1990. Jim said when he happened to see other Americans in the old USSR he could always pick them out from the crowd of Russians because the Americans were the only ones smiling.

Then when I was sent by the National Judicial College to teach Ukrainian judges in 2000 and afterwards to Russia to teach Russian judges in 2003, I had similar experiences. In Ukraine I took their dilapidated grey subway train and was crammed in with many Ukrainian men and women and one boy about six years old. The adults were all dressed in dark clothing and had sober dark expressions. No one smiled or nodded hello. Then I caught the little boy’s eye and smiled at him. At first, he almost smiled back then cast down his eyes.

In Russia, Peg was with me and we took the subway to see the Onion Domes of the Kremlin. Peg had on a light blue coat and I was wearing my red ski jacket. Every other person on the train had on dark clothes and dour faces. When Peg and I smiled at one another because we were happy to be in Moscow together, we were the only ones smiling. That’s when we realized what freedom and independence and the Fourth of July are all about. We are confident we have the right as Americans to control our own destinies. That means everything. And that is why when Americans are seen among the people of other nations often the Americans are the only ones smiling. But if we insist on imposing our will on other countries or upon one another, we should not be surprised if they do not smile back. On the other hand, perhaps if we respect the right of others to maintain opinions we find objectionable, they might bite their tongues and afford us the same respect when our views cause them to wince 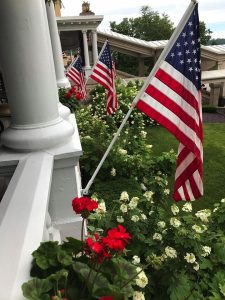