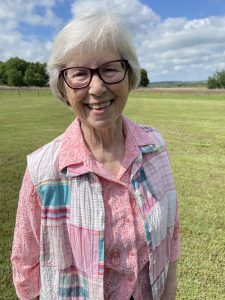 Peg’s recent, and successful, hip surgery has been a rewarding experience, for me. I have learned much and feel an almost female need to share. About half of the human race pretty much already knows what has been recently revealed to me but the testosterone half may profit from my force-fed lessons. Okay, class, let’s begin to lift the veil. Wives might be upset if husbands are made aware that the arcane lore of traditional house hold tasks need no longer be shrouded in mystery, But husbands have a right to know there may be more than one way to clean a house. Just as the insane strictures of military basic training have proven to have no relationship to national defense, much of what many wives demand are the only way to clean house should be relegated to the dustbin of history. May we start with dust itself?

Until Peg was rendered temporarily non-ambulatory a normal weekend at JPeg Osage Ranch might begin with Peg saying, “We (she meant me) need to get rid of all this dust! I saw a mote lurking along a baseboard in the back bedroom closet. What if someone from the roving movie production company wants to use our place for a scene? How humiliating that could be.”

I pointed out to Peg that the spic and span movie company covered the streets of Pawhuska and Fairfax, Oklahoma with dirt and horse apples. It does not appear dust is a problem for them. I suggested we could simply follow the movie’s example and set up a couple of green screens and project pictures of constantly clean rooms.  Peg did not see the efficacy of such a modern approach. By the way, the Killers of the Flower Moon (Gray Horse) production uses blue (green) screens.

Anyway, back to dusting lessons. Another rigid requirement for housewives, at least Peg, is that every item in the house must be moved and dusted under. I have found that if one does not move an item it is less likely that anyone can tell where there is any dust. Therefore, husbands, just leave things in place and only address any dead flies that may have accumulated nearby. Those probably should be removed as Peg and most other wives can see dead insects even from their convalescent beds.

Now what about laundry? Peg’s laundry system would put the Nazi army to shame. Each item of dirty clothes must be separated by either white or color, by heavy versus light dirt, by delicate versus hearty material, etc., etc. There is a container for each category and only like items may be washed together with scientific analysis of soap, bleach, and water temperature. I say “poppycock”. Dump ‘em in, turn it on and if every now and then a color runs that’s why there’s a Walmart.

But if washing in lockstep with Peg’s delusional belief that the gods of wash day actually care if a white sock mates up with a dark one, her approach to drying and putting things away is truly in need of some husband rationality. Husbands, do not fold the clothes! No one can’t tell once a tee shirt is in a drawer if it was folded with military creases or stuffed away. And do not waste time on separating items until you want to take something out to wear. You’ll know then what is underwear and what is outer wear.

Well, that’s enough common sense for now. I hope you can see the wisdom of my discoveries but mainly, I hope Peg is still under her meds when this article comes out. By the way, Gentle Readers, thanks for all the well-wishes. Peg is a true trooper and is doing fine.