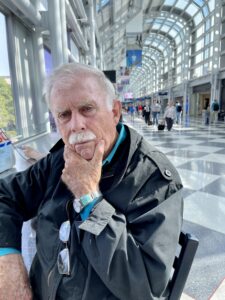 If you have traveled by commercial aircraft recently you can only marvel at the British security measures for the Queen’s funeral queue. From September 14 to September 19 about 250,000 people lined up for up to 24 hours to view the Queen’s coffin for less than one minute. Other than one fool who tried to touch the flag on her coffin and was immediately arrested, I am not aware of any “security incidents”.  In other words, our English cousins managed to process about 50,000 people a day without so much as a scuffle.

Now compare that to the airlines’ inability to keep many thousands, perhaps millions, of people from losing their luggage and missing their connecting flights while being prodded like cattle into uncomfortable seats next to complete strangers. And for that dubious privilege you pay enough money to purchase stock in the company. Although that may not be such a wise waste of your money.

It is not that I am unaware there may be bad people who both fly commercially and may want to harm others. Evil exists; I get it. But our response should not add to our grief. If the Brits can process 50,000 people per day and prevent any real problems, surely the airlines can manage to get a plane load of 300-350 passengers, such as fly on a Boeing 700 Series plane internationally, from point A to point B or points A, B, C, etc., within the time an airline ticket promises. After all, our tickets represent an obligation that is what we in the legal field call an adhesion contract. That is, you and I and all our fellow travelers are totally without any influence on the agreement. The airlines tell us where and when to show up and how much to pay and we show up and pay, even if we miss flights, lose luggage and wonder whom to blame but the gods. Does the Federal Aviation Administration come to mind?

Peg and I recently flew from Tulsa, Oklahoma to the country of Georgia. The cost of our tickets were such that Jesse James would have been proud. Since we were on business we paid an exorbitant rate to fly Business Class. What that got for us other than a hole in our checking account I have yet to discover. However, that is not the issue you and I are here concerned about. As instructed by the airlines, we arrived at the Tulsa airport three hours before our flight was to depart. Then we went through security and customs right there in Tulsa. Next the airlines flew us west to Denver. That is right, Gentle Reader, United Airlines flew us west to go east. The plane did not take on enough fuel in Tulsa, so when we got close to Denver we had to land in Pueblo, Colorado to refuel. That totally unnecessary stop caused us to miss our connecting flight from Denver to Munich, Germany. Once in Denver I had to stand in line for six hours, from 8 p.m to 2 a.m., to book another flight. Once we had our new flight plan we had to spend the night in the Denver airport on cots waiting to depart the next day. There were so many passengers who also missed their flights we were unable to sleep next to each other. Our flight from Denver to Chicago, yes, I had to rebook us through Chicago to Munich, took off around 11 a.m. We arrived in Chicago about 1:30 p.m. and had to wait in Chicago for our flight to Munich that took off about 10:30 that night. That was day one of our trip and we still had not left the United States. Of course, we had to go through security and customs again in Chicago before boarding the flight to Munich. The flight from Chicago to Munich was about 9 hours which took us into day two. When we got to Munich we had to wait about six hours for our flight to Tbilisi, Georgia, and, of course, go through security and customs again. By the time we got to Tbilisi at 4 a.m. Georgia time it was day three. Plus, our luggage got lost along the way. As our final destination in Georgia was the city of Batumi, that is a long car trip from Tbilisi, we had to wait in Tbilisi for two days for the airlines to find our luggage.

So, what can the airlines do to comply with the contract they have written and to treat passengers like customers instead of an inconvenience? I suggest one security and customs check at one’s initial departure airport should be plenty. At that first airport you can arrive early and give the airlines all the time that is needed to make sure one is not a danger and that one’s baggage follows along. Also, in this age of computerization, all of a passenger’s security and customs clearance information could be shared among the airlines, airports, cities and countries involved in a passenger’s trip. In our case that would have involved Tulsa, Denver, Chicago, Munich and Tbilisi and the United States, Germany and Georgia. It would also be helpful if the airlines would put enough fuel in the planes to avoid unplanned refueling stops and if the flight plans could exempt flying the wrong way.

If this approach is too sensible for the FAA and airlines, we could allow them to lose a customer’s luggage every now and then on a random basis so they do not feel superfluous. And, by the way, congratulations to the British for sending that marvelous monarch, Queen Elizabeth II, off royally. Maybe we should ask those Britons who planned and executed the Queen’s funeral to operate the airlines.