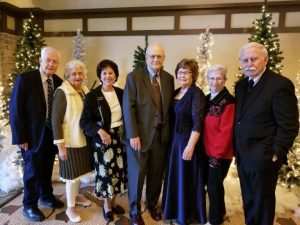 My earliest memories of Memorial Day involved hot cemeteries where all the adult women spent a great deal of time loudly hushing all the children and the few men in attendance furtively smoked cigarettes while shifting from foot to foot. Any attempt by me or my brother, Philip, to chase butterflies or engage in horseplay was met with stern stares and an occasional knock on the head or a swat on the tail.

Mother had three brothers and one sister who had served in the Army in WWII and Mom observed the service of all veterans solemnly and reverently; she demanded her children properly learn the ritual. Our role was to honor the dead soldiers and show gratitude to those veterans who were still with us.

Memorial Day has slowly metamorphosized from a national day of honoring veterans to a general recognition of all who have passed on. And Mother and her mother and their mainly female friends and relatives saw their duty to include the graves of deceased loved ones in various cemeteries in divergent locales. Mom would load all four of us kids and bunches of freshly cut ferns and flowers into a black Ford without air conditioning and without a thought on her part of a cold pop or an ice cream cone for us. She would say that was scant penance on our part to repay the sacrifice of our service people and their families.

I do not know how many veterans’ gravesites Mom dragged me to before I joined the Air Force myself during the Viet Nam War. I did not get sent to Viet Nam but several of my childhood friends did. One of them, twenty-two-year-old Gary Malone, went twice but he only came back once. That changed my understanding of Mom’s dedication to Decoration Day. I may be generally obtuse but I no longer needed a pointed stare, a tap on the head or a kick in the behind to appreciate Memorial Day. I sure wish Gary were here so I could tell him but his veteran’s memorial marker is close to my Mom and Dad in the local cemetery so I can, at least, salute Gary as I visit the folks on Decoration Day. I now get it; as always, Mother knew best.