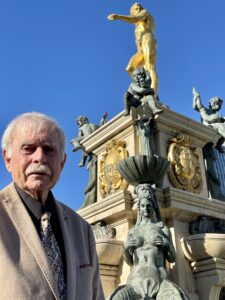 Peg and I were in our apartment on the seventeenth floor of our 90s-Era looking building at 6:30 pm (9:30 am Central Time) in Batumi, Georgia yesterday when the whole gigantic complex quaked and my chair, with me in it, moved. Peg had been out on the tiny open-air balcony watching hearty Georgians swimming in the Black Sea. She came right inside shaking about as much as the apartment. We had experienced earthquakes before in Indiana and Oklahoma so we realized why we suddenly had a complete loss of control over our lives.

Peg heard a loud crack while I, as oblivious as usual, just existed through the moment. It takes a lot of power to cause a 42 story high-rise apartment building to move even if it is built on the small mobile rocks that make up the Black Sea beach. After we decided The End was not yet here, we checked for damage; none was obvious but we now have less faith in our accommodations. Speaking of faith, we understood why there was a gold-colored statue of the Greek god Poseidon in the public square across from our home. Poseidon was the god of earthquakes and other natural disasters, such as floods and storms, you know, like the hurricanes currently attacking the Philippines, Cuba and Florida, among other victims. The residents of Batumi must have had to endure a lot of mini-quakes over the years and decided a statue to Poseidon might help protect them.

Apparently when we realize we cannot control our natural environment we humans create gods who can. It makes us more comfortable if we have something that can control Mother Nature even if it also has the power to destroy us. As for Peg and me, it did not help assuage our angst that earlier in the day we saw workers around our complex employing a couple of trucks and a crane that looked like they were leftovers from the Dust Bowl Era. It was apparent that the job was bigger than the tools even if the workers did not appreciate the problem.

It has now been about twelve hours since the earthquake and Peg and I have had the time to assess the situation. We know it was not the New Madrid earthquake of 1811 and it was not a harbinger of the San Andreas Fault we have all been warned about for one hundred years. Oh, that will come as, unlike never happening pots of gold at a rainbow’s end, disasters do eventually appear. All we can do is create more gods, or at least, beliefs, that something somewhere can get things back under control for us.