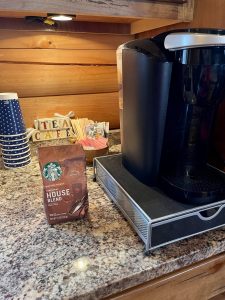 Starbucks Coffee Company has suspended operations in all 130 of its Russia based coffee shops as a protest to Russia’s invasion of Ukraine. The first shop opened in September 2007 in Moscow. Peg and I were in Moscow in 2003. We are Americans. We drink coffee. We were in anguished caffeine withdrawal almost the whole week we were in Russia. I applaud Starbuck’s gesture but worry about those people who are forced back to the pre-2007 coffee-less culture in Russia. Of course, the blame lies with Putin but the headaches are visited on the Russian proletariat as war is visited by Putin on the Ukrainians.

In 2003 Peg and I, after long and frenzied searching, located one coffee shop, The Coffee Bean, in Moscow. As this was our first trip to Russia we had been unaware of Russian culture which at that time considered one cup of instant coffee in tepid water good enough for such foreigners as we. The cold turkey shock treatment made us acutely aware of a society where vodka and cognac were more available at breakfast than coffee.

I do not expect Putin to come to his senses on his own so his war on Ukraine will most likely play out as such debacles always have. There is the initial shock and awe, then the search for weapons of mass destruction, the trading of lies and misinformation, then death, injury and misery followed by years of confusion and remaking of history by the survivors.

I do wonder what Putin’s thought process was that led him into this tar pit. He keeps making public statements and allegations about NATO and Ukraine’s belligerence. His statements and actions appear to arise from paranoia, what most of the world sees as an unreasonable fear that Ukraine and the other pre-1991 Soviet Union countries along Russia’s western border will be used as bases for the United States and our allies to attack Russia.

Putin may have reasoned that as Ukraine was steadily building up its ties to democracies such as America, if he did not strike now, he would have no viable defense to a stronger Ukraine that might become a member of NATO later. Such an analysis seems ludicrous to us but it is not our thought process that is in question. If Putin believes it, even if it is false, then his actions may make sense to him.

He also may have been misled by the relative ease with which Russia took over Crimea from Ukraine in 2014. In today’s attack his objective may have mainly been to take over that part of Ukraine, such as Odessa, that borders the Black Sea. But then he made a common tyrant’s mistake. He got too greedy and decided to grab what was left of the remainder of Ukraine beyond Crimea.

By this time, Gentle Reader, if you are still with me, you are asking, “What does any of this have to do with coffee?” Okay, as Fareed Zakaria might say, “Here’s my take”. I hope the Russian people will have become so hooked on coffee after 2007 that this forced Starbuck’s withdrawal will cause them to see Putin for the despot he is. Then perhaps the aroused common citizens will rise up and replace the warmongering Putin and his incompetent military leaders. If the Russians feel anything similar to the way Peg and I did in 2003, revolution is not so farfetched.