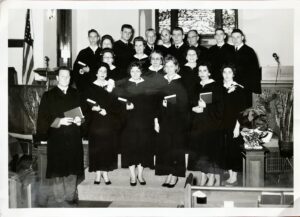 They tore down my grade school and built a church. It is a nice church that regularly fills up with nice people, some of whom I do not know and some I do. In fact, some of the church members whom I do know I first met in the first grade in our old sandstone elementary school that is now their church. I expect almost every time one of those old classmates pulls up to their new church, they get a nostalgic image of our old school. I know that every time Peg and I happen to drive by the fine new brick church with its lovely green lawn and flowering shrubs, images of a sward of almost non-existent short grass interspersed with small pebbles and an occasional anthill fiercely guarded by large biting red ants come wafting through my contemporary thoughts.

The large two-story sandstone building with a bell tower on top and a basement below was one of the first truly substantial buildings in my hometown and had once, or so I was told by my Osage Indian Sunday School teacher, Violet Willis, served as a school for other Osage girls. Miss Violet and my family attended another church that has now been abandoned with some of its congregation now joining with that of the new one that replaced both my old school and my old church. The new church thoughtfully preserved the large stain glass window from my old church that was the sanctuary’s focal point. The stain glass scene was of a beautiful stream that gave worshipers an impression the water was flowing right into the baptismal vault where I and my sister and two brothers were baptized. That old sanctuary was also where we four siblings all sang in the choir and where our Father and Mother both served as elders and were honored during both of their funerals.

The new church that replaced my old school and my old church also replaced that congregation’s original church building that had been located about one block from my old church. That old church served its congregation well for many years and also served me and other Explorer Scouts as our meeting place because the civic minded father of one of my best friends from our old elementary school both formed and financially supported our Explorer Troop and, as a member of that congregation, got permission for us to meet there. My old friend and his family still attend that church in its new location. I bet he thinks about both our old school and his family’s old church building frequently when he goes to his new church.

Gentle Reader, you may get a sense from these reflections that somehow I am casting some sort of shadow over those who have seen fit to make the changes in my old school or the two old churches or my old beloved community at large to whom and what I owe so much. You would be far from the mark. I was blessed to learn many treasured lessons from my old school and several old churches, only one of which was mine, and countless friends, teachers and wise elders. How could I rue the decisions they made that helped make me so gratified today?

Changes must happen and hopefully they will be positive. One lesson I learned from those halcyon days of now bygone buildings was that the generosity and wisdom of those who populated those structures and that of those who now frequent the new ones are what matters most.

To paraphrase Martin Luther King, Jr., it is not the structures that are most important but the character nurtured by those who dwell therein. Old schools, changing old churches and changing communities are inevitable. However, it is not inevitable that change is good; good people must make them so. I was fortunate to grow up where the people did.