Gentle Reader, if you read last week’s Gavel Gamut you will recall we were considering Alexis de Tocqueville’s observations of America as a country based on law. De Tocqueville’s parents, Hervé and Louise de Tocqueville, had barely escaped the guillotine during the French Revolution (1789-1799). De Tocqueville was born in 1805 so he and his family had an intimate personal understanding of the dangers of a nation ruled by individual people, not laws. De Tocqueville studied law and served as a magistrate. He knew the value of French philosopher Montesquieu’s theory of a government formed with a separation of balanced and competing powers (legislative, executive and judicial). And he agreed with the morality of English philosopher John Locke’s (1632-1704) theories that governments should serve their people whom nature had endowed with the rights to life, liberty and property.

When people call for revolution they might wish to re-visit Locke, Montesquieu and de Tocqueville or one could refer to those more contemporary English philosophers, The Beatles. As John Lennon sang while backed by the cabal of Paul McCartney, George Harrison and Ringo Starr in “Revolution”:

♫ You say you want a revolution

We all want to change the world.

But when you talk about destruction

Don’t you know you can count me out.

You say you got a real solution

Unfortunately, Mark David Chapman did not get the message. But Lennon’s untimely loss is an example of how ideology and ignorance can get weaponized as opposed to de Tocqueville’s prescient observation about how the United States holds its “revolutions” every four years via the ballot box. Americans may get quite passionate about their politics, but as Elizabeth Barrett Browning (1806-1861) might philosophize, “It (should be) a passion put to use”, not destruction.  (How Do I Love Thee). 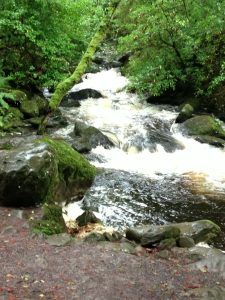 Alexis de Tocqueville (1805-1859) was a Frenchman who studied American society during a nine-month tour in 1831 when the United States were still simmering with vitriolic political animus from the 1824 and 1828 elections between John Quincy Adams and Andrew Jackson. Adams was elected by the House of Representatives in 1824 and Jackson won via the Electoral College in 1828. After neither election did the United States fall into chaos, even though Jackson won both the popular vote and a plurality, but not a majority, of the Electoral College vote yet Adams grabbed the presidency in 1824.

Four men ran for president in 1824, John Quincy Adams, Andrew Jackson, Henry Clay and William Crawford. Because the Electoral College vote was split in such a way that none of the four received a majority, as required to be elected President, under the Twelfth Amendment to the U.S. Constitution a “contingent” election was held in the House of Representatives. Each state’s delegation was given one vote and Adams was elected. Jackson and his supporters alleged that Adams and Clay had entered into a “Corrupt Bargain” to shift Clay’s votes to Adams. Regardless, Adams was elected by the House and the country moved on until 1828 when Jackson ran against Adams again.

In his treatise on American democracy de Tocqueville defined America’s presidential election as “a revolution at law” and described it as follows:

“Every four years, long before the appointed (presidential election) day arrives, the election becomes the greatest, and one might say the only, affair occupying men’s minds…. As the election draws near intrigues grow more active and agitation is more lively and widespread. The citizens divide up into several camps.… The whole nation gets into a feverish state.”

De Tocqueville’s ultimate verdict on America’s democracy was encapsulated in his general verdict on how political controversies were ultimately resolved. His observation was that:

“In America there is hardly a political question which does not sooner or later turn into a judicial one.”

De Tocqueville’s opinion was that the American manner of resolving political issues without bloodshed worked because, unlike European monarchies, the United States citizens respected the law and they did so because they had the right to both create it and change it. Since we get to choose our legislators who write our election laws and because we can change the laws by changing whom we elect if we are unhappy, we accept the laws as written including who is ultimately declared the winner of a current election.

The laws we have the right to create and the right to change include filing for an elected office, running for that office, who counts the votes, how they are counted, as well as how and when someone can legally contest an election. That legal procedure applies to all facets of an election cycle. Each state’s legislature has the authority to establish its own procedures in this regard as long as they do not violate federal law.

As an Indiana Circuit Court Judge I was involved in a recount of a congressional race, a county clerk general election, a county council general election, a town council election and a county council primary election. The Indiana legislature had enacted and published a clear statutory procedure for each type of election contest, including what role each public official should play in any recount. The statutes demanded total openness and media access to ensure the public could have confidence that if all involved followed the law a clear winner would be fairly determined. There were time limits, controls and transparency. After a recount result was certified in each contest life moved on and the eventual losers and their supporters accepted the results because they had had their “day in court”; that is, democratically enacted law was followed not the arbitrary or partisan activity of individuals.

De Tocqueville compared America’s hotly contested democratic elections to a surging river that strains at its banks with raging waters then calms down and carries on peacefully once the results have been properly certified. From my own experience with several elections and after the recounts of some of them, I agree with de Tocqueville’s analogy.

That is not to say I am for or against any type of recount for any office. I absolutely have no position on whether any candidate for any office should concede or contest anything. My position is simply that as long as the law is properly followed our democracy can handle either circumstance.

Why are so many people on all sides so angry about the United States Supreme Court life-time appointment? The answer may be in the question: it is an appointment and it is for life.

The true genius of the Founding Fathers was they understood power corrupts and since human beings constantly seek power it must be diffused into three branches of government. What they did not anticipate was that the Supreme Court, the Judicial Branch, would slyly usurp the power of the Executive and Legislative branches, starting with Chief Justice John Marshall and the case of Marbury versus Madison in 1803 in which the Supreme Court declared it had the power to review and invalidate or validate decisions of the other Branches.

This power of review established an inequality among the three Branches that has grown to a crisis. Where the Judicial leg of the stool has neither power of the purse nor the gun, this power of review protrudes causing an imbalance. This is exacerbated by the appointment of the justices and the manner in which the appointments are made. They are appointed for life by one person, the President, with the “advice and consent” of the Senate, i.e., one hundred more people.

Whereas the public has the right to vote for the President and each member of Congress, the public is shut out of choosing the extraordinarily powerful people in the Judicial Branch. This causes great concern for contesting groups when such personal issues as health care, police powers, control of one’s body, and distribution of tax monies may work their way from the legislative and executive bodies to the courts. For it is more true today than ever that as the visiting French philosopher and tourist Alexis de Tocqueville declared in 1835: in America, eventually every political question becomes a judicial one.

With the President, every four years we can make a change. With members of the House of Representatives, every two years the entire House can be changed and with the Senate, if we wish, in six years we can choose someone else. That is the crux of why people are so desperate to influence the choice of a Supreme Court Justice, i.e., it is not a choice made by them and it is for life.

It seems to me a rational solution is to change how we select our federal judges. Of course, I think all judges at all levels should be elected in a modified non-partisan election, but today we are just addressing the federal food fight that embarrasses and endangers us all. I suggest we put any future Supreme Court replacement on the ballot and limit their term. Of course, this will require amending the Constitution, but the Constitution has been amended many times before. Power to the People, not the politicians, is worth considering and worth the trouble it will take to make the change.

Gentle Reader do not despair. We have reached the final week of our discussion of the Internet course for Rural Court Judges. You will no doubt recall our previous sessions on the scintillating topics of Rural Court Case and Court Management. Well, the best is yet to come. I only wish we could hear from the student judges from Alaska to Maryland who attended the seven week National Judicial College course that I helped teach. Surely they were filled with the same excitement I felt as an Indiana University freshman law student during Contracts classes, perhaps much as you have been while reading Gavel Gamut the past few weeks. But, all good things must come to an end so let us summarize what we have studied.

We started with the proposition that the most essential criterion for being a Rural Court judge, or any judge, is good character. Intelligence and industry are fine attributes but ring hollow if a judge cannot choose the harder right over the easier wrong. As Socrates told his Athenian judges who tried to have it both ways, “Your job is to do justice, not make a present of it.”

You may remember the prescient observation made by Alexis de Tocqueville (1805-1859) when he wrote of his impressions of America in Democracy in America: “In America practically every political question eventually becomes a judicial one.” Of course, for those questions to be answered properly the judiciary must be fair and impartial and the public must have confidence they are; politics must not enter into a judge’s decisions.

That astute one-time Hoosier Abraham Lincoln who knew a little bit about politics and a lot about judging saw the legal profession’s role as to first be peacekeepers. To keep the peace judges must enjoy the public’s confidence in the absolute impartiality of judicial decisions. Character is the cloak that must robe a judge.

And when a judge is faced with those difficult cases where he or she is tempted to slip off the blindfold and tip the scales of justice, the only refuge a judge has is his or her character. That is what judges heard during our Internet course and what Bobby Kennedy meant when he said, “Some see things as they are and ask, why? I dream what things could be and ask, why not?”

Of course, society often rewards those of weak character and severely punishes those who choose the harder right. But that pressure is what judges must withstand. So where we start and end our course on Rural Court judges is the same proposition: judges must keep the blindfold on and their thumbs off the scale.