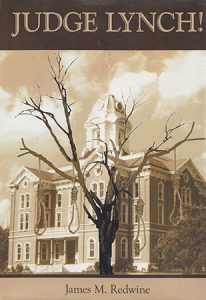 On September 18, 2021 I received an email from Mr. Ben Uchitelle, Attorney at Law, in Clayton, Missouri. Mr. Uchitelle had read my book JUDGE LYNCH! and found my email address, jmredwine@aol.com, from my website, www.jamesmredwine.com.

“The negro had no social standing in Mt. Vernon but they did not seem to feel any the worse for this. They were treated well so long as they knew their place. One of the great tragedies of their lives in Mt. Vernon was the lynching of four of their number by a mob. Oscar Thomas, a white deputy sheriff, was going to the home of a colored man to arrest him, was shot and killed. Feeling ran high, a white mob was at once organized and four of their number were hanged on trees in the Public Square, and it is claimed that one negro man was put into the fire box of an incinerator and burned to death. How many of the lynched negroes were guilty I do not know, but the bodies of those hanged in the Public Square dangled in the air nearly all next day. I asked the coroner, Uncle Bill Hendricks, why he did not cut them down. He answered, ‘I hain’t had no official notice that they are dead.’ Certainly a profound and unanswerable reason.”

I appreciate Mr. Uchitelle sharing this eye-witness account with me and urge others who might have historical records of the 1878 murders such as letters or diaries to contact me. The truth has no statute of limitations.

From my first knowledge of these horrific events that Oscar Thomas’ descendant, Ilse Horacek, gave to me in 1990, I have sought to uncover the facts. What I do know from my research is that Mr. Manuel Cronbach’s poignant comments illustrate the attitude of the general population of Mt. Vernon and Posey County, Indiana in 1878 and, perhaps, long after. As a practicing Posey County Attorney, Posey County Chief Deputy Prosecuting Attorney, County Attorney and Posey County Judge for a total of well over forty years I find the callous official attitude of Coroner Hendricks to be one of the saddest aspects of the whole matter.

Other portions of Mr. Cronbach’s account that are pregnant with what they do not say is his question as to how many of the lynch victims were guilty. Since none of the four lynched men were involved in the death of Officer Thomas, the answer is zero. And Mr. Daniel Harrison, Sr. who was involved was grabbed and chopped into pieces and his parts were dumped in the jail outhouse.

But the word in Mr. Cronbach’s account that most loudly calls out to me is “organized”, as John Leffel, who was the owner and editor of the local Western Star newspaper in 1878, reported that two to three hundred white, male citizens of Posey County, Indiana organized themselves into a well-regimented, armed group and marched onto the courthouse lawn and murdered all five Black men.

As I have done since 1990, I am still calling for the community to finally and publicly atone for the sins of 1878 and erect a memorial to the victims on the courthouse square. Thank you, Attorney Ben Uchitelle, for contacting me and for your interest in justice, even if justice remains long delayed.