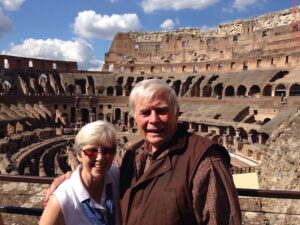 Donald Trump has declared he will make a third run for the presidency in 2024. Joe Biden claims he will seek re-election. Several Republicans, Ron DeSantis, Mike Pence, Mike Pompeo, and others are not so secretly hoping lightning strikes them, or maybe strikes Trump. Democrats Gretchen Whitmer, Kamala Harris, Cory Booker, and others are feigning fealty to Biden but may be looking wistfully at the effects of Father Time.

In other words, American politics remains unchanged from the days of Jefferson and Adams. It also has regenerated its tiresome media circus of peeking under tent flaps and salivating at the probability of political gaffs. So, buckle up or just tune out for the next two years. As for me and Peg we have been looking at the past, as the present is just too fractious. So, as the pundits and politicians squabble like infants with dirty diapers, Peg and I have been interested in viewing the ancient ruins that became ruins when the cultures of the past let their tantrums get the better of them.

A couple of years ago we visited Rome and walked around the Coliseum. One gets images of gladiators and emperors who had no thought their pretentious edifice would be a mere pile of rubble one day. Then just last week we visited another ancient fort less than ten miles from our home in the country of Georgia. Georgia claims, according to the book Georgian Folk Traditions and Legends, to be situated at the juncture of Europe and Asia and to “[b]eing the most invaded country on earth.” For example, Russia that is Georgia’s neighbor to the north has most recently invaded Georgia in 2008 and 2014.

However, the fort we visited was built by several conquerors over thousands of years but was constructed in its present form on the orders of Roman Emperors Nero, Pompey, Julius Caesar Tiberius and Hadrian during the era 65 BC to the reign of Constantine, 306-337 AD. The name of the fort is Gonio-Apsaros Fortress and it is an impressive structure with ancient stone guard towers, sewage and water systems and Roman hot baths. Of course, today it is all just remnants of past glory. It is on the outskirts of the resort city of Batumi, Georgia near the shore of the Black Sea and about 3 miles from the Turkish border.

Gonio reminded us of the hauntingly impressive Native American pueblo village at Mesa Verde National Park in Colorado. This extensive cliff city was home to many Native Americans for over 700 years from 600-1300 AD. Was it simply abandoned, and if so, why? But once again we observed an impressive series of homes and a mountain stronghold that now is interesting and beautiful, but not lived in by its creators.

I suppose there are many reasons we enjoy visiting these sites of once vibrant communities gone dormant. The inventive genius of our human ancestors gives one a sense of awe and appreciation for the hard work and perseverance of people who were probably quite similar to us. If we could transport them to modern times or transport us back to their times, everybody would most likely fit right in with just a little movie make-up and a change of clothes.

The conclusion or question that keeps us awake, for example I am writing this at 3:50 a.m., is that just as the country of Georgia has been conquered numerous times (as has Jerusalem by Jews, Muslims and Christians on a revolving basis, and Rome and Greece by Vandals and Visigoths and North and South America by Spanish, English, French and Portuguese invaders) are our ruins going to provide interest to tourists of the future?