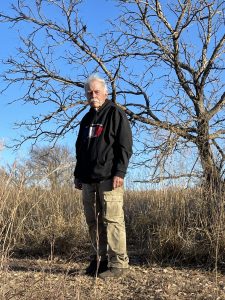 Mr. A.H. Holloman owned and operated a gravel pit near the small town of Frederick, Tillman County in southwest Oklahoma. The pit is about one half mile wide and 7 miles long. Holloman discovered numerous artifacts of ancient human occupation in the pit in 1920. The supposed age of the items suggested modern civilized Homo sapiens created them 130,000 years ago. However since this conflicted with the generally accepted theory that Homo sapiens arose in the Olduvai Gorge in Tanzania, Africa 60,000 to 80,000 years ago, the scientific community discarded the archeological evidence at the Holloman dig for many years.

Then Professor David Deming of Oklahoma University published an article claiming modern humans may have originated in Oklahoma. Deming (born 1954 in Terre Haute, Indiana) graduated from North Central High School in Indianapolis, Indiana then graduated from Indiana University in 1983 with a BS degree in geology. He earned his PhD in geophysics from the University of Utah in 1988.

As a matter of full disclosure, I am an IU grad and currently live in both Indiana and Oklahoma. Most importantly, I garnered all my information about Professor Deming and his research from Wikipedia. At least it wasn’t Twitter.

Anyway, as a member of the faculty of the National Judicial College in Reno, Nevada I am currently helping to teach an on-line course to sitting judges. The course concentrates on courthouse security, ethics, court technology and what are the proper roles and behaviors for America’s judges with an emphasis on rural courts and judges new to the Bench. A rural court is defined as a jurisdiction having one to three judges and a less urban atmosphere. Mr. Joseph Sawyer, long-time NJC staff and faculty member, is in charge of the course that relies on several experienced judges as teachers.

At our first class session for 2019 which was Thursday, September 12 the general discussion pertained to what cultural purposes do judges serve and what do and should citizens expect when they attend court. In other words, what, if anything, other than wearing black robes and pontificating do Americans perceive judges to do?

Since I had just last weekend read about Professor Deming’s work, as we engaged in class discussions about the proper role of judges, I merged my thoughts of history and modern judicial culture. I asked myself what is it you, that is I, have been doing as a judge for the past 39 years and has any of it mattered other than to provide me a paycheck? Basically, what is a judge and what should be a judge?

While I should have been concentrating on the interesting comments of my fellow faculty members and our student judges I found myself musing about the folks that inhabited the Holloman gravel pit about 130,000 years ago. That’s probably about the time society decided we needed some way other than clubs to resolve disagreements. I envisioned three families of the earliest Homo sapiens existing in proximity in three separate huts. Let’s imagine the wife of the man in hut number 1 decides to decorate her hut with flowers that only grow beside hut number 2. Wife 1 gathers up the flowers and wife 2 takes umbrage. The husbands of 1 and 2 each grab a club and mayhem is in the offing when the wife in hut number 3 suggests a meeting run by her husband, ergo the first judge.

The judge suggests a compromise whereby the flowers are shared and the wives in huts 1 and 2 work together to beautify both huts as well as the judge’s hut with the participation of wife 3 (was this our first courthouse?). Crisis averted. Peace restored. Justice done. A system of justice created.

Gentle Reader, I confess that in my humble opinion, judging really is about that straight forward. All the rest is just window dressing.

The Olduvai Gorge in Africa is accepted by many as the original birthplace of all human ancestors. The gorge is found on the Serengeti Plain in northern Tanzania. Archaeologists and paleontologists have spent many years researching our greater family tree since Dr. Louis Leakey and his wife, Mary, found the fossils the Leakeys opined were evidence of our oldest known ancestor.

Competing evidence for human origins was discovered in the Afar Depression in Ethiopia on the continent of Africa by Donald Johanson, Yves Coppens and Maurice Taieb who named the humanoid bones they found “Lucy” and dated her at about three million years old. Regardless of what evidence one follows, virtually every recognized authority on human history agrees every person who has ever lived can be traced back to this area of Africa. For us to return to our roots we would have to visit our grandmother Lucy or perhaps some other related fossil nearby. I will not attempt to determine how many “greats” that is.

I do know if Lucy was anything like my mother was she probably wondered why it took a couple of million years or so before any of her fourteen billion descendants paid her any attention; why can’t those kids, grandkids, etc., ever write home?

Anyway, I got to thinking about Lucy when the media began to report on President Trump’s tweets about The Squad: Congresswoman Ayanna Pressley (Democrat, Massachusetts) born in Cincinnati, Ohio of African American heritage; Ilhan Omar (Democrat, Minnesota) born in Somali, Africa; Rashida Tlaib (Democrat, Michigan) born in Detroit, Michigan of Palestinian lineage; and, Alexandria Ocasio-Cortez (Democrat, New York) born in the Borough of Queens in New York City and of Puerto Rican parents.

President Trump tweeted out on July 14, 2019 that each Congresswoman should go back to their country of origin … “[A]nd help fix the totally broken and crime-infested places from which they came. Then come back and show us how it is done.”

In an interview with CNN’s Kyung Lah on July 18, 2019 Kamala Harris (Senator from California) born in Oakland, California who is an announced candidate for President of the United States in 2020 and who has African American ancestors said of President Trump, “He needs to go back where he came from. And leave that office.” Donald Trump was born in the Borough of Queens, New York City, New York and is of German and Scottish heritage. Although I do understand how people from one of New York City’s five boroughs may consider someone born in one of the other boroughs to be foreign born or someone from California may consider a native New Yorker an alien and vice versa and that those folks in New York and California may see the rest of America as one giant undeveloped wilderness. Regardless, here we all are. Maybe a little wisdom from Rodney King, that eloquent and forgiving victim of mob and police violence, may be in order. As Mr. King asked in 1991, “Can’t we all just get along?”