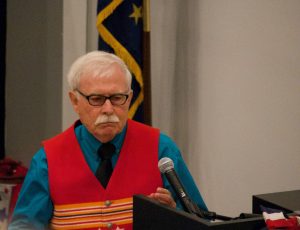 Three of the United States Supreme Court’s own members Elena Kagan, Stephen Breyer and Sonia Sotomayor warn us the Court has appointed itself, instead of Congress or the EPA, the decision maker on climate policy. An outcome the three dissenters found frightening. See the dissenting opinion of Kagan as joined by Breyer and Sotomayor in West Virginia v. EPA decided June 30, 2022. What they meant was that the unelected Supreme Court installed the Judicial Branch as the policy maker for an issue, management of the environment, that should be within the Legislative Branch that is subject to democratic control, as the Court is not.

Most of us are unable to see the irony in our own actions. The same is true of the Supreme Court. The six-member majority of the Court couched its decision in terms of preserving policy making in Congress as opposed to unelected bureaucrats at the Environmental Protection Agency. But, according to the Dissent, what the Court did was simply replace the EPA with the Court as the ultimate decision maker on the broad, critical issues of environmental management.

In the similarly ironical decision Dobbs v. Jackson Women’s Health handed down 24 June 2022, the same majority set the U.S. Supreme Court up as the final policy maker on the volatile issue of abortion by deciding Roe v. Wade must be overturned and each state should decide the issue.

The same three dissenting justices warned in Dobbs that:

“The Court reverses course today for one reason and one reason only: because the composition of this Court has changed. Stare decisis, this Court has often said, contributes to the actual and perceived integrity of the judicial process by ensuring that decisions are founded in the law rather than in the proclivities of individuals. Today, the proclivities of individuals rule. The Court departs from its obligation to faithfully and impartially apply the law.”

It is not the substance of either the EPA case or the abortion case that is our concern in today’s column. Those emotional issues of global warming and human reproduction are just too volatile and complicated to be adequately discussed in one short column. Instead, what I am struck by is the obtuseness of nine unelected, life-tenured people who arrogate themselves as final arbiters of issues so vital to the lives of 330 million Americans.  Perhaps the Supreme Court has finally brought in to focus that the justices are merely politicians on a micro scale. What I wish to discuss is how we might retain our three equal branches of government through a macro democratic process.

Does any rational observer of the Court deny the justices are simply politicians who wear black dresses and pretend to be apolitical? The justices are not to blame. If you, Gentle Reader, or I were placed by Presidential nomination and Senate confirmation on the Court, we would take our prejudices and “proclivities” with us. The problem lies not with the members of the Court but with the undemocratic way they are selected coupled with their life-time tenure. It is our Court and our Constitution and we should change both.

We have amended our Constitution 27 times. We should do so again. I suggest that the members of the U.S. Supreme Court and all federal judges be elected in a non-partisan election for one 10-year term. Once their term is honorably served, we should pay them their full salary for life and they should never serve as a judge again. The impeachment process should remain an option in case we make a mistake.

In summary, federal judges are no better or no worse than the rest of us. They are human, they have “proclivities”, they are politicians. We should drop the façade of “philosopher kings” and have our federal judges recognized as a full-fledged branch of our democracy as selected via a democratic process.

As described by Winston Churchill, “Democracy is the worst political system except for all the others”. And as we suffer through our ongoing political pandemic and naively hope for a November 03 cure the political sausage making gives evidence of Churchill’s observation. On the other hand, if we step back from the splattering mud, we might find some passing amusement in the process. Of course, that is only if we personally or people we care about are not running for office.

The first political campaign I cared about involved the presidential race between Lyndon Johnson and Barry Goldwater in 1964. As I was active military at the time I was quite interested in each candidate’s position on the “police action” in Vietnam. Also, 1964 was my first chance to vote as I had just turned 21 and the 26th Amendment lowering the voting age to 18 was not ratified until 1971. You may recall, if you lived through the ’60’s, or you may have seen old black and white TV images of that famous political advertisement run against Goldwater showing a little girl plucking a daisy as a mushroom cloud rose in front of her. Well, I saw it in 1964 and heard Johnson promise not to send “American boys to die in an Asian war”. As I was one of those American boys, that sounded good to me so I voted for Johnson. That was my first lesson in political reality.

1964 temporarily cured my faith in voting but I relapsed in 1972 when as a young lawyer I decided to save the criminal justice system by supporting a friend of mine in his bid to be elected county prosecutor. Another idealistic attorney friend of mine and I dove head first into election day politics. We stayed up all night making political signs then at o’dark-thirty started putting them up at polling places. We were involved. We felt virtuous.

Then we pulled into a large precinct where many people were lined up to vote. As we each grabbed a sign with our champion’s name on it and jumped out of my old Ford sedan a large woman hustled up to us and asked if we had been sent by “Headquarters”? Neither of us knew what a political party’s headquarters was so we stared at her blankly as she loudly proclaimed, “Well, you better get some ‘supplies’ out here as these people ain’t voting right!” We headed home.

No, democracy is not perfect but it is not all bad and you have to admit it is often interesting. Peg and I still vote every time we have the opportunity even though we are aware our government is staffed with humans, not Plato’s recommended Philosopher Kings. Do we sometimes get disappointed by our choices; certainly.  Do we get discouraged; yeah. Do we want any other political system; nope!