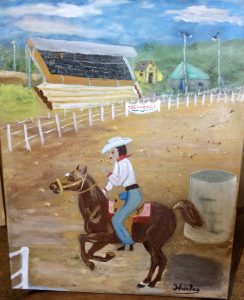 Joseph Campbell (1904-1987) was a professor of literature at Sarah Lawrence College for over thirty years. Campbell is probably best known as George Lucas’ source for the mythology permeating the Star Wars anthology. Good versus evil, light versus darkness, hope versus despair and, throughout human existence, alertness to being alive versus remaining unaware of our experiences. To Campbell, the unpardonable sin is to be unaware, that is, to not be truly alive as we meander through our lives unaffected by what is happening around us. For me, Black History Month evokes an introspection of my callow youth and its blissful ignorance of the difference between my white world and that of my, as we called them then, Colored friends.

I scarcely knew Blacks and whites lived separate lives during the 1940’s, 50’s and the first half of the 60’s. I was happy and assumed others were too. Things were as they ought to be or at least they were okay with me as they were. It did not seem strange when before 1956 my father would take us across Bird Creek to Colored Town and Booker T. Washington School to watch Colored boys play basketball. Then after 1956 it felt fine to see Blacks and whites mix on the court, but not in the churches and not at our homes or businesses.

Before the Pioneer Woman’s Mercantile brought expanded options for estrogenous pilgrims to my hometown of Pawhuska, Oklahoma the cultural center for testosterone types were my small town’s three pool halls. Now, we of the male persuasion can drink good coffee as we wait for breakfast, dinner or supper as our wives accumulate treasures. But in days of segregation gone by the white businessmen of Pawhuska frequented the Smoke House on Kihekah Avenue where they played Dominoes, those white men interested in beer with their games usually went to Curry’s on Main Street and we younger males congregated at Palace Billiards that was also on Kihekah. Henry Roberts owned and operated the Palace that we boys always called Henry’s. It had a tile floor, four wooden game tables with slate tops and scattered wooden armchairs where the cowhands would drink Dr. Pepper while chewing tobacco and spitting into the brass cuspidors on the floor or back into their bottles. Henry’s double front doors had plate-glass windows that allowed for the only sunlight to shine into the business. The front of the pool hall faced Kihekah and there was a single solid back door that opened out to the rear access and the latrine. Colored boys were allowed to enter through the rear door to play pool on either of the two pool tables that were right next to the back door. Coloreds did not come up front to the two snooker tables nor to the game tables. The entire pool hall was contained in one narrow, open, window-less rectangular room about fifteen feet wide and fifty feet long.

The favorite table game was 4 Point Pitch played with dominoes, we called them rocks, that had cards on their faces, not domino dots. The players would shuffle the rocks by sliding them around on the table then, depending upon the number of players, up to a maximum of eight, deal out 6 rocks per player. Points were won for the highest card of trump played, the lowest card of the trump suit played, one for the jack-of-trump and one for “game”. The point for “game” was calculated by adding four for any ace, three for any king, two for any queen, one for any jack and ten for any ten. The maximum number of points that anyone could accumulate in any one round of play was four. That was also the maximum allowable bid and the bidder got to name the trump suit. The first person to score a total of eleven won the pot. If more than one person happened to go over eleven at the end of a hand, whoever had won the bid for that hand won the pot, that is, as long as that player made his bid. If you bid and went set you got a “hicky” and it cost you the same as a game, usually one dollar. So, you might win one dollar from up to seven other players and, if any had failed to make a bid, an additional dollar. Frequently games had fewer than eight players, often as few as two and it was quite cutthroat as everyone played to set the bidder.

Colored boys never played Pitch or snooker. The racks for the snooker and pool cues were also separate. Whites could have played pool but none of us did. I do not ever remember wondering about that or why Coloreds came in the back door. Nor do I remember myself or anyone else ever speaking to any of the Blacks who eased quietly in from the back, and placed their coins to pay for pool on the table to be picked up by Henry. Now as I look back, I think we all were committing Campbell’s unpardonable sin and handling our experiences as suggested by psychologist and poet Bonaro Wilkinson Overstreet (1902-1985) when she cited the following poem in her Introduction to Philosophy:

Stiff with refusal to be bent by snow.

Young hemlocks sloped their boughs beneath the load.

Each solved no doubt, to its own satisfaction.

The problem posed by uninvited weight.

I’d not take sides with either.

I have tried both ways of handling fate.”

Unfortunately, it was not until much later that I tried the “bolt upright” approach to segregation and I do not know if my more “alert” response has been of any more efficacy. Next week we might delve into these issues with folks who probably were more aware than I was because they were living life from another perspective.