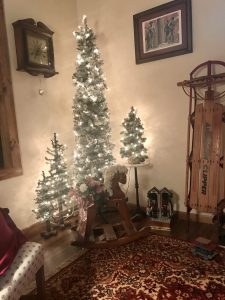 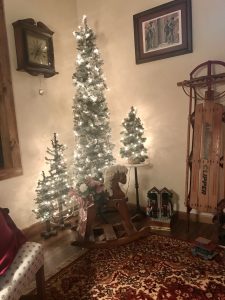 Yuletide is the Germanic term for the season that begins with the Winter Solstice, usually about December 21 or 22. For 2019 the fleeting moment when Earth’s true North Pole was at its maximum tilt away from the sun occurred on Saturday, December 21 at 10:19 p.m. Central Standard Time. The winter or hibernal solstice marked the twenty-four hour period of the calendar year with the least sunlight and the beginning of longer daylight days. Humans probably have always celebrated this event. It is the true “new” year.

For many people the end of the year’s gradually darkening after the Summer Solstice, about June 20 or 21 each year, is a time to reflect on the past and hope for the future. One need not be superstitious to experience a period of introspection when darkness turns to light. Nature provides the perfect metaphor.

For Peg and me as leftovers from the turbulence of the 1960’s retrospection often includes the days of Jim Crow and America’s legal system. These painful recollections were once again seared into our psyches when we happened to come upon the 2018 movie Green Book while surfing television shows for something of value, that is, something other than the cacophony of vile opinions claiming to be news.

Green Book is based on events from 1962. Dr. Don Shirley (1927-2013) was an African-American pianist who decided to engage in his own sociological experiment concerning racism in America. Instead of designing a laboratory environment where rats are manipulated and observed followed by conjectural opinions, Shirley literally put some real skin in the game, his. He hired a white Italian-American from New York City to be his driver and event manager then, with a white cellist and white bass player, the four of them dove into America before the Civil Rights Act of 1964. It was not pretty. Believe me, I remember.

I was born in 1943 in the legally segregated state of Oklahoma. I lived the good life of a middle-class white kid and young man with hardly a thought about why everyone I went to school or ate out with looked like me. If I ever had a passing observation of this phenomenon until after Brown vs. The Topeka Board of Education in 1954 I do not recall it.

Then in 1957 Oklahoma used “all deliberate speed” to comply with the United States Supreme Court’s decree that its previous decree that Separate but Equal was no longer constitutional. Turns out the Judicial Branch is no more virtuous than the other two. Not surprised? Me neither.

Anyway, the public schools of Oklahoma initiated their version of integration and the “colored” kids from Booker T. Washington School across Bird Creek from the rest of us came to school with the rest of us. Of course, public transportation, restaurants, restrooms and water fountains remained pristinely white until after the Civil Rights Act of 1964. Jim Crow still reigned.

Green Book transported Peg and me back to those not so thrilling days of yesteryear. Don Shirley was kept back by the dominant white culture to those dark days symbolized by the Winter Solstice. Perhaps whoever erected the Stonehenge paean to the coming light had their own demons to quell. My guess is there is in human nature a certain element of dark mentality that is constant and that each generation must re-learn and deal with that fact.

Of course, for one to recognize the darkness in our souls we must have the ability to appreciate the possibilities of the coming light. When the light finally expels the dark, if it ever does, we will be able to dispel the competition between good and evil by not just hiding from the long night but reveling in the light.