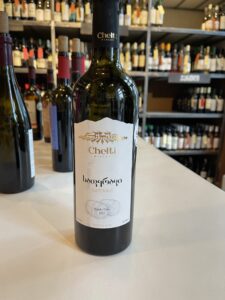 Peg and I have been away from our U.S.A. home for almost 5 months now and we are each missing some of what makes our cabin on the Oklahoma prairie so special. Peg is nostalgic for kids, grandkids, great grandkids, siblings and friends, you know, Gentle Reader, the things most people get misty-eyed over. I feel her pain but, frankly, I find that what our current home in the old Soviet Union country of Georgia really needs to join the family of democratic nations is a good bowl of chili and some hand-rubbed and torturously slow smoked Oklahoma beef brisket accompanied by a few ears of southern Indiana sweet corn.

And while Georgia claims to be the 8,000-year-old birthplace of wine, a theory which Peg and I have certainly tested, I thirst for a cold Corona with salt and lime. One cannot truly swig a real draught of room temperature red wine as you can a long swallow of cold beer to follow the piquant spice of garlic and cayenne pepper. Tell me, is it any wonder these Georgians worry about some crazy Russian neighbor on their northern border wanting to once again invade them and take their most valuable natural resource, their wine? Russia has no chili, no brisket and nothing but vodka to drown their sorrows about pesky Ukraine; of course Russia is a concern.

I have written several columns about how America could better address Russian aggression than by throwing forty billion dollars worth of military assets into the same type of winter Napoleon and Hitler did. Russian generals January, February and March may not know much about military strategy, but they sure know plenty about the logistics of winter warfare.

Why hasn’t Commander-in-Chief Biden read my columns and called to ask my advice? I would tell the President the same thing I would tell the Georgian McDonald’s and Kentucky Fried Chicken stores just two blocks from our Batumi, Georgia apartment that put out poor imitations of Georgian food disguised as quasi-American cuisine; they could make billions with a good bowl of real chili and a beef brisket sandwich. These Georgian people are smart and their traditional Georgian food is both tasty and interesting. This is probably due to thousands of years of mixed cultures from both Europe and Asia. But if we could just introduce them to what truly makes America so strong, Russia would not stand a chance.

I confess, it is not just the war effort that moves me. If we don’t get some fine southwestern chili and bar-b-q and succulent southern Indiana sweet corn soon, Peg and I are going to have to fly home and rely upon friends and family for sustenance.

Take a block of marble and chip away everything that isn’t an elephant. The same principle applies with chili made by Yankees.

When the United States Air Force stationed me at Indiana University to study Hungarian I arrived with a solid foundation in chili. My previous life had been pretty much confined to Oklahoma and Texas where chili was to cuisine as basketball was to Hoosiers. There was none of this nonsense that chili is to be eaten only in wintertime.

In the southwest we ate chili year round and all day long. Chili on eggs at breakfast. Chili poured in a bag of Fritos for snacks. Chili at wedding receptions. Chili at church potluck dinners. Bricks of frozen chili at scout camp.

Chili was a health food. It was served to colicky children and constipated seniors. If the ancient gods of the Greeks and Romans had discovered chili they would have looked askance at ambrosia. The true Land of Milk and Honey can be found in the chili parlors along the banks of the canal through downtown San Antonio.

So, Gentle Reader, you might grasp my befuddlement when I ate my first meal at Indiana University and saw a sign on the chow line announcing that chili and grilled cheese sandwiches were being served, but when the nice lady behind the counter handed me my bowl of “chili” it had large red and white things floating among the greasy gunk.

“Ma’am, I don’t know if you noticed but there’s some strange stuff in my bowl.”

“Uh, it has red and white globs swimming in it.”

“Those are red kidney beans and macaroni.”

Then I met Peg who not only was from east of the Mississippi she was also a Yankee from above the Mason-Dixon Line. Fortunately for me, we got married before she ever cooked for me the first bowl of what she called “chili”. She added celery to the kidney beans and macaroni. At our home, a pot of chili calls for two pots now: one for the chili I make and one for whatever you call what Peg makes.

Over the years I have spent in this Hoosier heaven for everything but chili I have had friends serve me chili with tofu, eggs, potatoes, kidney beans, white beans, chicken, sugar, macaroni, spaghetti, and a lack of cayenne pepper. Enough! Chili is shredded beef or hamburger, browned then drained. Sautéed onions, water, salt, black pepper, chili powder, garlic, cumin, cayenne pepper, tomato sauce and, for some, chili beans are slowly added to the sizzling meat and then masa flour added at the very end to thicken the mixture. It is simmered for a minimum of two hours then served with Fritos or corn tortillas with hot sauce, preferably Tabasco, chopped raw onions and shredded cheese on the side. THAT IS ALL! That is chili!

(Folks, this is Peg. I’m the lucky person who gets to type and edit these Gavel Gamut articles. I just can’t let you get the wrong idea this time. I had never heard of chili with macaroni or spaghetti either until I moved to Hoosierdom! In Yankeeland we made our chili with browned and drained hamburger, kidney beans not chili beans, tomato sauce or tomato soup, a little bit of ketchup, chopped celery and onions, salt and pepper and maybe a dash of chili pepper if we felt daring. Chili is served with Saltine crackers, not Fritos. That’s the difference between Yankee chili and my Dear JJ’s southwestern chili!)