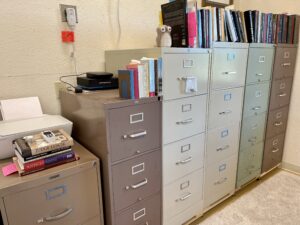 When former President Donald Trump moved out of 1600 Pennsylvania Avenue in Washington, D.C. he took fifteen boxes of stuff with him that he stored at his Mar-a-Lago home in Florida. Someone tipped off the FBI that the boxes were stashed in some closets. Who might that have been is one of the matters the FBI and the Department of Justice wish to keep confidential. That information is most likely part of what was redacted from the Affidavit that was filed with the application for the Search Warrant. We in the general public, therefore, do not know who the source was; I certainly do not. However, I do have a theory for your consideration, Gentle Reader.

It is reported that the 15 boxes contain governmental documents with news articles and magazines interspersed. Who would be concerned with such stuff being left sitting around the house? If The Donald is like most husbands, he probably does not get exorcised over a few extra items thrown into an attic, a basement or a closet. However, if Melania is anything like Peg, she takes a dim view of stacks of stuff cluttering up her house.

I remember when Peg and I last moved she took it as an opportunity to jettison a great deal of what I held dear, such as stories about my youth and old files from legal cases long forgotten. Anytime I was not vigilant Peg would trash my treasures to make room for her new acquisitions in our new residence. Clutter is to Peg as the contents of the Augean Stables were to Hercules and it seems most of what I hold dear as personal history Peg decrees to be stable staples. We are in a perpetual yang and yin of store or shovel when it comes to my inclination to preserve what Peg sees as dross. My guess is Donnie and Melania live a similar dynamic.

Now I do not know what was in the boxes. I do know the stuff sat around Florida from when the Trumps left Washington on January 28, 2021 and the country seemed to chug along okay until August 08, 2022 when the Search Warrant was executed. The stuff in the boxes did not seem to affect America’s decision to send billions of dollars of military equipment to help Ukraine defend the war against Russia’s invasion. It is probably what the psychologists would call my retrogressive inhibitions from the 1960’s, but for some reason visions of Viet Nam and Afghanistan keep muddling around in my brain.  The contents of the boxes may be of no more significance than the contents of the file cabinets I struggled to schlepp down three flights of steps from my attic in our old home and haul to a barn at our new one.

That is not to say Donald should not turn them over to the National Archives. Maybe they are important, or not, but they still belong to all of us. And I wonder if Melania may not have been that unhappy to see the closet doors open for the FBI to haul the offending boxes away so that they have now become the National Archives’ problem instead of hers

On August 08, 2022 the FBI executed a search warrant at former President Donald Trump’s residence, Mar-a-Lago, in Palm Beach, Florida. That is about the extent of what we in the general public know about the situation. There is a great deal of speculation about the process but very little of that speculation is likely to be unbiased. The search of any former president’s home would of necessity be embroiled in competing political interests. Many important issues are in play and countless questions arise.

We in the general public may be greatly affected by the search and the motivations for it or there may be no great significance to our democracy. We do not yet know the basis for the search or the reasoning of those who sought, granted or executed it. And that is unacceptable as almost always, our interests as a nation are better served by more factually correct information than less. A lack of transparency engenders suspicion and confusion. In a country so at odds over Donald Trump, more light is best. Careful release of information may be called for but it is more likely that the greatest harm to our country will result from suspicions raised by in camera legal proceedings.

There are good reasons our Founders saw Great Britain’s use of General Warrants and Writs of Assistance as cause for Revolution. The Fourth Amendment to our Constitution was adopted to protect our right to be free from unreasonable searches and seizures. It requires “an Affidavit of Probable Cause supported by Oath or Affirmation and particularly describing the place to be searched, and the persons or things to be seized.”

I do not ascribe to the fear our country is near another revolution. However, I do think we should seek to benefit from the wisdom of those who fomented the first one. Was the search of Donald Trump’s home called for by the facts? Were those who made the call properly motivated? Was the Fourth Amendment followed?

Perhaps it was in America’s best interests to search Mar-a-Lago. Maybe evidence of “High Crimes and Misdemeanors” was secreted in the premises. If so, then a search was not only justified, it was required. However, until the secrecy is removed and the light of justice is brought to bear, the citizenry is in the dark. And that dark might lead to more harm than the revelation of some uncomfortable documents.

Some of you may have noticed I have been a judge for awhile. And, although I know it may surprise you, not everyone of my thousands of decisions has been met with universal acclaim. Occasionally someone may actually disagree with my fair and objective legal analysis and have the bad form to say so. Well, my friends, not if we were in Egypt.

According to a report in the Palm Beach, Florida Sun Sentinel of Sunday, December 31, 2017 a court in Cairo convicted 19 people of making public statements, “[t]he court found to be inciting and expressing contempt toward the court and the judiciary”. If you are wondering why I was reading the Palm Beach paper in sweltering 80 degree weather while some of you may have been enjoying a cool and exhilarating Indiana Christmas season there is no truth to the rumor it was because Peg and I felt compelled to be near President Trump’s Mar-A-Lago winter White House. We did not even receive an invitation to his $750 per person New Year’s Eve party. It may have been lost due to the holiday rush at the post office. Anyway, back to Egypt and the injured dignity of the judiciary.

The newspaper reported that the heinous criminals insulted the judges by making statements that were aired on TV, radio, social media or in other disfavored publications. Now the court did not deign to ignore these demeaning comments or to call for the miscreants to tug vigorously on their forelocks. Oh no. The defendants received 3 years in prison and were fined up to one million Egyptian pounds ($56,270 US).

Each defendant was also ordered to pay one million Egyptian pounds to each of the judges of the powerful union known as The Judges Club. Now I would never advocate for such a response against anyone who had the temerity to publicly disagree with my rulings. However, a few hours in the stocks on the courthouse campus might be considered or parading around the courthouse wearing sackcloth and ashes or maybe a few public recitations of “Judge Redwine is Solomon” or, well, you get the idea.

Actually, it is events such as those in Egypt that truly show what a blessing it is to be in a country where CNN, MSNBC, The NY Times, The Washington Post, FOX News, Breitbart and many other publications can spew their invective against anyone from the Supreme Court to even a court in Posey County, Indiana without fear of being jailed.

Instead of just worrying about the current protestors in our enemy Iran perhaps we should address the draconian pronouncements of offended judges in countries such as our friends in Egypt and elsewhere. The injured sensibilities of some pompous plutocrat may lead to far greater harm to the public than their unfair judgments that get publicly condemned.