When our son, Jim, served in the Gulf War in 1990-91 and the Iraq War in 2006-07 and briefly in the Afghanistan War in 2007 he observed one of war’s most vital premises: our country should never fall behind the curve of military superiority. America was fortunate to recover from Pearl Harbor in time to help the Allies survive World War II. In the age of nuclear and cyber warfare we might not be able to survive World War III with outdated technology. The United States must remain vigilant. Vigilance does not call for aggression. In fact, our Constitution demands defense, not offense. However, we have been in an offensive mode militarily since we unwisely intervened in Viet Nam after France was driven out in 1954 after the Battle of Dien Bien Phu. Beginning in 1956 America saw fit to emulate the errors of the French and we have been intervening militarily in numerous countries ever since.

One thing we Americans thought we had learned from the discovery that our government had misled us into the Viet Nam War was the old truism that in war the first casualty is truth. This adage is often attributed to Aeschylus (525-456 BCE) but it probably has been noted by many observers of peoples drawn into wars by their leaders. By the way, those leaders have almost always not been the ones to do the fighting.

Such examples as King David sending Uriah to die in battle to hide David’s seduction of Uriah’s wife, Bathsheba, Second Samuel, chapter 11, or perhaps President George W. Bush’s false claim that Iraq had weapons of mass destruction or now our government’s claims about our war in Afghanistan may illustrate this ancient principle.

Just this month Special Inspector General for Afghanistan Reconstruction John Sopko testified before the House of Representatives Foreign Affairs Committee that America’s war in Afghanistan, our longest war ever, was conducted on a basis of lies to get and maintain Congressional political and funding support. The Washington Post newspaper published reports that Douglas Lute, former White House Afghan War official under both President George W. Bush and President Barack Obama, had testified America invaded Afghanistan in 2001 without a fundamental understanding of Afghanistan or what America planned to accomplish there.

Of course, Americans are no longer surprised that our government misleads us into wars. Unfortunately we have become inured to it. That is the danger. It is as frightening as the old story of the boy who cried wolf. If our government continues to mislead us into unnecessary wars, will we citizens respond appropriately when, and it could happen some day, we are asked to sacrifice our lives and treasure for a just cause such as our country’s survival?

Adolf Ochs (1858-1935) pinned the motto of the New York Times newspaper: “All the News Fit to Print” in 1897. It remains on the paper’s front page today. Mottoes sometimes are more hope than substance.

In 1965, as the Viet Nam War was gearing up and 18 year old men could be drafted but could not vote, Barry McGuire (born 1935) sang ♫The Eve of Destruction♫. The lyrics included the following phrases:

“The eastern world, it is expoldin’
Violence flarin’, bullets loadin’
You’re old enough to kill but not for votin’
You don’t believe in war, but what’s that gun you’re totin’?
….
The poundin’ of the drums, the pride and disgrace
You can bury your dead but don’t leave a trace
Hate your next door neighbor, but don’t forget to say grace.”

“I rolled out this morning
Kids had the morning news show on
…
Some senator was squawkin’ ‘bout the bad economy
It’s gonna get worse you see, we need a change in policy
…
Just once how I’d like to see the headline say
‘Not much to print today, can’t find nothing bad to say’
…
We sure could use a little good news today.”

So, Gentle Reader, I submit the following retreat from the edge of doom and a little good news for your April First consideration.

It was announced today that Sean Hannity has been hired to replace Wolf Blitzer at CNN and Joe Scarborough will be joining FOX News.

At his debut on CNN Sean Hannity reported that Hillary Clinton and Donald Trump had met with Mitch McConnell and Nancy Pelosi at Camp David where they decided to apply the national defense budget to universal health care and free college tuition for all.

The budgets for the CIA and FBI will be redirected to environmental concerns and repair of the nation’s infrastructure. McConnell was assured by Chuck Schumer there would be unanimous support for these proposals in the Senate. And in the House, Minority Leader Kevin McCarthy heaped praise on both Pelosi and Clinton as he pledged his ardent support for both.

At a conference of media anchors held just outside the gates of Camp David it was announced by Washington Post’s editor Martin Baron that the national print and electronic media were impressed with the honesty, integrity and goodwill of the Executive and Legislative branches. Baron even mentioned the anticipated wisdom of the Supreme Court that is expected to refuse to grant any delays in the implementation of the stated goals of fair and equal treatment for all Americans.

Well, Gentle Reader, that’s about all the Good News I can report. It appears the country is just brimming with good works and goodwill. 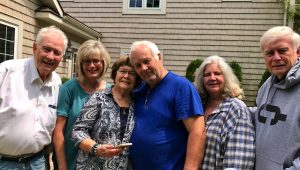 I believe in the United States of America
As a government
Of the people,
By the people,
For the people,
Whose just powers are derived
From the consent of the governed;
A democracy in a republic;
A sovereign Nation of many sovereign states;
A perfect Union;
One and inseparable;
Established upon those principles
Of freedom, equality, justice and humanity
For which American patriots
Sacrificed their lives and fortunes.
Therefore, I believe it is my duty
To my country to love it,
To support its Constitution,
To obey its laws,
To respect its flag,
And to defend it against all enemies.

This poem by William Tyler Page was adopted by a Resolution of the United States House of Representatives on April 03, 1918 as America was helping to end the Great War to End all Wars (WWI).

It was recited by Ann Greenfield who is Posey County, Indiana’s First Lady of Political Service during the impressive and appropriate Fourth of July program sponsored by the Friends of the New Harmony Working Men’s Institute, University of Southern Indiana/Historic New Harmony and the New Harmony Kiwanis.

Ann is of that generation where capable women believed they could best serve by supporting capable men. The demographics of history support this regrettable reality. Fortunately, at least in America, history is being rewritten and the wisdom of such women as Ann, my sister Jane (Redwine) Bartlett, my wife Peg, and many more may be what guides us through the troubled waters we appear to prefer to curse instead of carefully navigate.

Perhaps it is provident that as we face our current challenges involving technology, health care, the environment, military deployments, immigration, equal justice and more issues than can fit in one column, we have in reserve a fount of experience, knowledge, self-sacrifice and wisdom whose time to spring forth is just now arrived.

The generation of women who helped end the Viet Nam War, started us on the road to equal justice, began to demand equal opportunities for everyone while still managing to bind our wounds brings unique talent, experience, perspective and courage to today’s bitter divisions. Of course, huge numbers of women have always personally joined the fight while many others saw their place as spear carriers. But the current challenges require a general call to arms where all the available soldiers are engaged. I respectfully suggest that we encourage women in their 60’s, 70’s, 80’s, 90’s, and maybe even some elderly women, to step forward on their own. Your time has finally come and we need you; more importantly, your country is hurting and it needs you to lead on the field not cheer from the sidelines.