America is a wonderful country from the amazing amalgam of cultures in cities such as Miami, New York City, San Francisco and Portland to the majesty of Yellowstone and the Mississippi River. We are truly fortunate to have the privilege to live here. As for Peg and me, we are most familiar with two counties in two states, Posey County, Indiana and Osage County, Oklahoma.

Of course, the basic element of all inhabited areas is the same, the inhabitants, and those inhabitants are more alike than unalike wherever we live. I have found this to be true from Russia and Ukraine to Palestine and Bahrain as I have taught judges from several foreign countries and from every state in America. Of course, I have also physically visited a few places around the world. It has been my great pleasure to discover practically everybody I meet is interesting. I understand why Will Rogers who grew up near Osage County, Oklahoma said he’d never met someone he didn’t like.

But just focusing on Posey County, Indiana and Osage County, Oklahoma, the two places Peg and I call home, I find much to admire in both. In Posey County the soil is so rich and the people are so industrious that enough wheat, corn and soybeans are produced to feed much of the world. And Osage County’s Tallgrass Prairie and hardworking cowhands furnish the accompanying beef. One need never go hungry if he or she spends time in either county.

I hope I have made it clear that I truly appreciate the county where I was born and the county where I have earned a living. On the other hand, just as there was a serpent in the Garden of Eden, both Posey and Osage Counties fall a little short of perfection due to the foibles of Mother Nature. I suppose life just requires that we occasionally find half a worm in an apple. Let me explain.

Neither Posey nor Osage County has unbearable weather. Each gets a couple of snows each year and each has a hot July and August along with a rainy spring and fall. Both experience tornadoes. For Posey County, Big Creek and the Ohio and Wabash Rivers occasionally flood as does Bird Creek in Osage County along with the Arkansas and Caney Rivers. But all in all the climate for both counties is fairly salubrious. In fact, the weather in both helps make them more interesting and for Indiana it gives citizens something besides basketball to talk about and for Oklahoma it expands the topics beyond football. Both states used to discuss politics but recently most rational people do not broach that topic.

However, it is not the occasional weather phenomenon that keeps paradise just out of reach for both counties. No, it is Mother Nature’s diabolical sense of humor. Let’s take up spring in Posey County first. You may know that Osage County, Oklahoma has thousands of roaming buffalo (bison). Well, just to make sure Hoosiers remember who dictates what happens in heaven, each April, May and June millions of biting/blood sucking buffalo gnats (flies) descend on Posey County much like the Biblical hordes of locusts. And like beachgoers after the movie Jaws it simply is not fun to be outside.

But Osage County has its own flies and to add to Mother Nature’s amusement She has supplied Osage County with several varieties of scorpions. Gentle Reader, should you never have been stung by a scorpion, as I have in Oklahoma, trust me, it is an experience you do not want. Peg, who is a born Yankee who spent her childhood in New York, Vermont, Massachusetts and northern Indiana, has now learned to shake out her boots in the morning to be sure some scorpion has not chosen them as a residence. And the ubiquitous sand rock of Osage County appears to be a scorpion’s version of the Garden of Eden where the scorpions play the serpent’s role.

I guess what it comes down to is both Posey County, Indiana and Osage County, Oklahoma are wonderful places to live. But don’t forget to channel Katherine Hepburn in The African Queen and wear screening over your head and carry a fly swatter in Posey and shake out your boots in The Osage nine months out of the year. 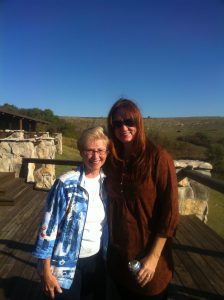