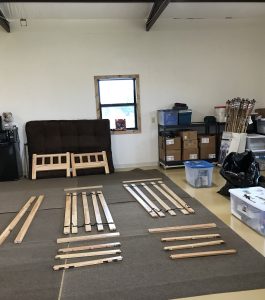 When I was a child nobody hugged or kissed anybody unless they were sweethearts or perhaps, occasionally, mother and child. People felt no need to get closer than arms length and nobody breathed on anybody. Then along came bleeding heart liberals and day-time TV shows and voila! Hugging was de rigueur. Suddenly perfect strangers were greeting one another as if they were Romeo and Juliet. I say it’s time to return to those not so thrilling days of yesteryear. It is not like people did not love one another before the 1980’s. After all, the human specie has thrived for thousands of years without faux hugs and kisses and families used to have lots more kids. But no one thought less of you back then if you did not invade their space. Maybe social distancing is a recommendation we can live with. Thank you Tony Fauci!

Peg and I would appreciate it if the rest of the world, except for family and delivery drivers, would stay away for the next few months. Maybe by then we will have a vaccine for COVID-19. One caveat, it is important that computers continue to create funny money pursuant to an on-going Congressional Resolution so that we can receive our Social Security checks. In return, Peg and I will pledge to leave everyone else alone and not attend any public events. No one would be there anyway since the rest of the world will be in their basements watching such enlightening Netflix entertainments as Tiger King.

By the way, I just saw a report on cable news that they may make a movie about Joe Exotic and his big cat petting zoo and crazy conspiracy theories. As announced from prison, Joe wants Brad Pitt to play Joe in the movie. I bet Brad is proud. Actually Peg and I had never heard of the Tiger King until our erstwhile neighbors, Chuck and Bonnie Minnette of New Harmony, Indiana, called to ask us about it. I guess since we recently moved to Oklahoma and there’s hardly anyone out here, the neighbors thought we might know Joe; we do not!

Regardless, back to the column at hand. Other than cable TV, with the COVID-19 panic about the only social activity left to any of us is contemplation of conspiracy theories such as those of Joe Exotic. I know we Americans have always been able to find boogeymen, et al, everywhere from Salem, Massachusetts to Roswell, New Mexico. But our current situation of a total national shutdown has caused a paradigm shift in our public psyche.

If the news reports can be credited, some in the Communist Chinese government posited, and maybe actually believed, that the original outbreak of COVID-19 in Wuhan, China in December 2019 was deliberately started by American soldiers. Then some in America floated the idea the pandemic may have been a deliberate creation of the virus as a weapon by China or Iran.

Those two conspiracy theories are about as credible as the reasons given by railroad engineer Eduardo Moreno who, once again according to news media reports, on April 2, 2020 attempted to ram a ship by driving his train’s engine off the tracks to within a few hundred yards of the U.S. naval ship Mercy. The Mercy is a military hospital ship sent by our government to aid the residents of Los Angeles during the COVID-19 crisis. Moreno told the police he believed the ship was part of a government conspiracy to takeover America. I had no idea a train could even travel that far off its tracks. Anyway, I think Mr. Moreno has been watching too much cable TV news.

Then there are the gun rights advocates who see a business lockdown as a government attempt to take away our right to self-defense. Also, there are those Religious Right devotees who see a nefarious plot behind the urgent government push to find an inoculation for the Corona virus. Apparently their fear is that such ideas as espoused by Bill Gates to implant computer chips in people for health reasons is really a cover to allow universal monitoring and control of our lives.

Well, Gentle Reader, you may know of other conspiracy theories. Heck, you may have one or two of your own. I know I sure do. However, as for Peg and me and social distancing, as long as our Social Security checks and the delivery workers keep coming, we are okay with whatever theory floats your boat. That is as long as you keep six feet away and wear a mask. Don’t worry; we promise to neither hug nor kiss you.

James Mattis is President-Elect Trump’s choice for Secretary of Defense. According to former Secretary of Defense William Cohen, Mattis is a student of history who understands the dangers of Thucydides’ Trap. Thucydides (471 – 400 B.C.) was an Athenian historian who lived through the Peloponnesian War (431 – 404 B.C.), which exhausted both the loser, Athens, and the eventual winner, Sparta. This thirty years of internecine carnage sowed the seeds of Greece’s vulnerability to Roman conquest.

Thucydides observed it was the rise of the upstart Athenians and the fear and resentment of that rise in the more powerful Spartans that led to war. Archidamus, the Spartan king, had cautioned his citizens to not be hurried into conflict out of any sense of offended honor or an attitude of superiority. However, hotter heads prevailed.

The United States is unquestionably the strongest nation on Earth militarily and economically. We may have the power to dictate terms to most other countries. We are the Sparta of our time.

On the other hand, we may wish to learn from history, not repeat it. If Russia attempted to influence our elections, we should address this serious issue with all due diligence. Due diligence is not a euphemism for dueling.

If China builds artificial islands in international waters and declares them China, we need not make a bellicose response. Maybe negotiation from strength might be better.

If the United Nations Security Council passes a unanimous resolution that calls for Israel to follow international law, due diligence does not require that Congress withhold funds from the United Nations unless Israel gets a retraction.

Now that Secretary Clinton and President-Elect Trump have ended their election cycle neither they nor their supporters should precipitate a Pyrrhic Victory for our country by continuing to attempt to delegitimize their opponents or their opponents’ positions by the technique of circular firing squads.

Perhaps it is time to once more look to the wisdom of some of those marvelous ancient Greeks and even our own President Lincoln and not let a misguided sense of offended honor or an overestimation of our own righteousness lead us to another long series of self-destructive attitudes and actions.

{This article relied heavily on an article dated May 6, 2015 by Leon Whyte that drew upon the scholarship of Harvard Professor Graham Allison and appeared in The Diplomat. Click here to go to referenced article ->}

♪ Does (everybody) really know what time it is? ♪

I will leave it up to you, Gentle Reader, to analyze the meaning behind President-Elect Trump’s rejection of the “intelligence” of the groups that gave us “Weapons of Mass Destruction”. As for me, I am transfixed by the notion that America has all these agencies containing hundreds of thousands of people whose job it is to spy on someone. My concern is who? There are only a few folks such as Russia, China and, an assortment of enemies our intelligence agencies created for us by surreptitiously toppling their governments, who might actually need watching.

What about the other 5 billion people on the planet, especially the 330 million Americans? All those thousands of spies have to either spy on somebody or get jobs, judging maybe. I fear our firewall against foreign enemies might turn inward out of boredom or partisanship. But after years of having our country insert itself in places such as Cuba, Viet Nam, Iraq, Afghanistan, Syria, etc., etc., my real fear is eventually our intelligence manipulators will get us into a hole even the most powerful country in history cannot claw its way out of.

Usually Peg is the only one who reads these articles. However, I feel as if someone will be peering over her shoulder this time. Oh well, it will probably be some of the same disingenuous spooks who have tried repeatedly and unsuccessfully (so far) to get us to bomb Iran; so there is probably no need for us to worry.