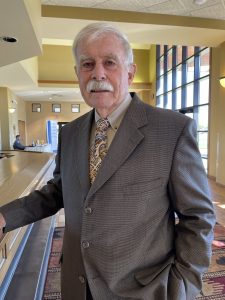 As first light appeared on the snow covered ground the morning of November 27, 1868, Cheyenne Chief Black Kettle emerged from his tepee as a woman came running across a stream of the Washita River screaming, “Soldiers, soldiers!” Black Kettle must have thought he was re-living the morning of November 29, 1864 on the banks of Sand Creek, Colorado Territory. That is when and where Colonel John Chivington and seven hundred troops of the U.S. Cavalry massacred a large number of Black Kettle’s tribe.

Black Kettle had settled his tribe at Sand Creek at the suggestion of U.S. Cavalry Major Scott Anthony based on the Ft. Wise Treaty of 1861 signed three years earlier. Major Anthony gave Black Kettle a white flag of truce to display to any soldiers who might come upon Black Kettle’s tribe and mistake its members as hostiles. Chivington ignored it. Only three years after the Sand Creek betrayal, Black Kettle and the United States at the Council of Medicine Lodge, Kansas reached another peace treaty ensuring safety and hunting rights for the Cheyenne along the Washita River Valley in Indian Territory (Oklahoma).

During the Sand Creek incident Black Kettle’s wife was shot several times but survived. His wife and he were not so fortunate at The Washita. Lieutenant Colonel George A. Custer and members of the U.S. Cavalry were acting on orders from General Philip H. Sheridan to: “Kill or hang every warrior. Bring back all women and children.” Both Black Kettle and his wife, Medicine Woman, were shot dead while trying to flee.

“During 1868 the tribes of western Indian Territory had been slow in settling on their reservations assigned by the Medicine Lodge treaties. Some warrior bands had raided settlements on the border. To punish these Indians, the Seventh Cavalry, led by George Armstrong Custer, rode out of Fort Supply (in what is now western Oklahoma) in late November 1868. At daybreak on November 27, Custer and his troops reached the Washita River and made a surprise attack at Black Kettle’s Cheyenne camp. The Seventh Cavalry killed more than one hundred warriors and took fifty women and children as prisoners. The soldiers burned the village and captured a large herd of horses. Chief Black Kettle was among the dead. The Battle of the Washita was more of a massacre than a battle.”

There are other descriptions of The Washita incident. One of the versions most sympathetic to the Indians is contained within Oklahoma historian Charles J. Brill’s (1888-1956) account, Custer, Black Kettle and the Fight on the Washita, that was first published in 1938. Brill reported that Custer’s plan was to use his five-to-one advantage over the Cheyenne and surround the sleeping Indians:

“Custer was not long determining his plan of attack. This time (unlike Sand Creek) there would be no opportunity for his intended victims to escape by flight. Before morning he could surround the village. At a given signal the encircling battle line would converge on the unsuspecting Indians, who then would be completely at his mercy. It would be a wipe-out.”

And there are those who observed The Washita incident in more generic terms. In his The Battle of the Washita historian and professor Stan Hoig (1924-2009) says of Sand Creek and The Washita:

“That both events were massacres-which utilized the element of complete surprise against a people who did not consider themselves to be at war in which troops who had orders to kill anyone and everyone before them made no attempt to allow surrender-is hardly deniable by any accepted use of the word ‘massacre’.”

Professor Hoig told the story of The Washita as a clash between cultures:

“At stake were the will and conscience of the United States in resolving the great dilemma of the American Indian. It was an issue in which no middle ground was begged, and one for which history offered no definitive answer concerning the rightness or wrongness of one society and people overcoming and displacing another. At hand was not only the question of human morality but also the march of empire and the inevitable contest between barbarism and civilization.”

Oklahoma in November can range from the temperate to the freezing such as occurred on November 16, 2021 (76℉) and November 19, 2021 (31℉). That there was a foot of ice and snow surrounding Black Kettle’s village on November 27, 1868 is not without precedent and that much more died that day than principle and morality is neither.

A special thank you is due to Cheryl Salerno, Librarian of the Oklahoma Wesleyan University Library
in Bartlesville, Oklahoma for her courtesy and assistance.

As Martin Scorsese ramps up production for his movie of David Grann’s book, Killers of the Flower Moon, concerning the tragic murders of members of the Osage tribe in and around my home town of Pawhuska, Oklahoma, I thought Mr. Scorsese might appreciate a little movie making advice. Here is some information he may find helpful.

Ten years before Pawhuska’s favorite son, Ben (Son) Johnson, Jr., won an Academy Award for his role as pool hall/movie theatre owner Sam the Lion in The Last Picture Show I sold him a Stetson hat. Son, I called him Mr. Johnson, was home for a visit in Pawhuska, Oklahoma in 1960 and I was working Saturdays at Hub Clothiers Men’s Store on Kihekah Avenue. Son had just that year had a gun fight with Marlon Brando in One-Eyed Jacks.  I am not suggesting I deserve any credit for Son’s later success but I am pretty sure the hat he wore in The Last Picture Show was the one I sold him; it looked about right for wear and tear.

In addition to that association with stardom I would like to point out that one summer during Vacation Bible School my Sunday School teacher at the First Christian Church, Violet Willis, had our class film a re-enactment of the Christmas story. It was in July and we threw up a manger of blankets and black jack posts on the banks of Sand Creek near the falls in Osage Hills State Park. I played a shepherd. Now I know there aren’t too many sheep in Osage County but I thought my portrayal was still pretty authentic. And it may be of note to Mr. Scorsese as he directs his new movie about Osage County that Violet both lived and worked at the Osage Agency and was herself Osage.

My memory is that Violet used an 8-millimeter hand-held Bell & Howell camera and that she cast my friend and classmate, Glenda Van Dyke, as Mary. Glenda was blond haired, blue eyed and ten years old but she pulled off the young Hebrew mother role quite well I thought. I wish Glenda was available for a casting by Mr. Scorsese now.

Another person who might merit consideration is my big sister, Janie. Much as Lana Turner was discovered at the soda fountain of the Top Hat Café on Sunset Boulevard in Burbank, California, Janie used to work at the soda fountain of Mom and Pop Curry’s snack shop next to the Kihekah (now the Constantine) Theatre in Pawhuska. Janie might be of more utility behind the camera as she is good at giving directions.

And although I do not wish to accentuate my own resumé, I think in fairness to Mr. Scorsese I should mention that I did have a role in my high school’s junior play. Further, I am generally available except when Peg has me doing some chore around JPeg Osage Ranch.